The Event-Driven Edge with OpenFaaS

Learn how OpenFaaS can be used to deploy event-driven functions at the edge.

OpenFaaS at the edge

OpenFaaS is well known for being able to run on commodity hardware like homelabs, cloud VMs, and on IoT devices, but did you know that we designed a distribution specialised for the edge?

If you’ve not heard of it yet, meet faasd. faasd ships with all the same Core Components that make up the OpenFaaS Stack, but instead of using Kubernetes to deploy them - it uses containerd and CNI directly.

By removing clustering and multi-host networking, faasd can deploy the entire stack including its UI, REST API, Prometheus monitoring and queue-worker on a host with as little as 512MB total RAM. Alex showed us how in First Impressions with the Raspberry Pi Zero 2 W

Functions deployed to the Community Edition of OpenFaaS can be invoked synchronously or asynchronously through the use of a NATS queue. It also has support for scheduled invocations through the cron-connector.

Whilst this is already a very versatile stack, we built a set of new features to bring event-driven programming to OpenFaaS. This currently includes:

You can watch an overview of faasd and why we should think about scaling down more in this video from KubeCon:

OpenFaaS at the edge

You may be familiar with Alex’s course: Kubernetes at the Edge with K3s which explores the differences between K3s and upstream Kubernetes. K3s is after all, often called an “edge” distribution, but still consumes a significant amount of CPU at idle, and can take multiple seconds to load up a HTTP endpoint.

Whilst OpenFaaS usually talks to K3s or Kubernetes, faasd connects directly to containerd, this means you can get productive without learning how to deploy and operate Kubernetes. By shrinking things down, we get new possibilities for the edge like on IoT devices and in industrial or air gapped environments.

Any CLI or HTTP server that can be packaged in a container can be deployed to OpenFaaS, including bash and powershell. You can find some of the community templates here.

What might you want to do at the edge?

I’ll now walk you through some of the features that we think make OpenFaaS even better suited to building your own event-driven edge.

The official guide to faasd is Serverless For Everyone Else which explains everything you need to know about setting it up with many examples written in Node.js

A common option for edge may be a Raspberry Pi, Nvidia Jetson Nano, an IoT gateway, or a Virtual Machine Hypervisor.

By default faasd runs a stack of services that make up the core of OpenFaaS. It uses a subset of directives from the compose-spec to define these services in a docker-compose.yaml file. You can extend this file to deploy additional services.

The spec lets us define TCP ports, environment variables, custom users, along with files and volumes to mount into the container. These can be stateful like databases or a Grafana dashboard.

The book, Serverless For Everyone Else, has a complete chapter on how to add additional services and containers to faasd. It includes examples for running Grafana, PotgresSQL, Influxdb and Redis.

An OpenFaaS Pro license is required to run the pro components. The license file will have to be created on the faasd host at /var/lib/faasd/secrets/openfaas-license. faasd will mount this file into the respective components container.

At the start of 2022, OpenFaaS released a new UI dashboard. The new dashboard offers you a nice visual way to discover deployed functions. It enables you to see the deployed functions per namespace and shows you the total invocation count and replica count of each function along with some other rich metadata.

An overview of functions

By clicking on a function you can access a detailed view displaying the deployment data, runtime data and some metadata for that function. When deployed on Kubernetes the dashboard also displays a functions memory and cpu usage but these metrics are not available yet on faasd. The runtime section shows you the invocation metrics over a period of 1 or 24 hours. It is possible to access the logs of any function in the dashboard.

Function detail page, including metrics, logs and meta-data about its deployment

To run the dashboard, edit /var/lib/faasd/docker-compose.yaml and add:

You’ll also need to copy openfaas-license to /var/lib/faasd/secrets/ and generate your key and key.pub file, instructions are available in the docs.

Scaling down to zero

Functions that are idle most of the time consume memory and CPU resources unnecessarily. This can be problematic on resource constrained devices. So to free up resources, these idle functions can be scaled down to zero replicas.

Whilst the faas-idler is no longer used with Kubernetes, and is superseded by a new autoscaler, it is still useful for faasd.

The faas-idler can be deployed to handle scaling functions to zero. If a function is idle for a predefined period, the faas-idler will make an API call to scale the function to zero replicas. The function is scaled back up to the minimum desired amount of replicas upon first use. On faasd this will be a maximum of 1 replica since it does not support multiple replicas at this time.

Functions are not scaled to zero by default on OpenFaaS. You opt-in on a per function basis by setting the label com.openfaas.scale.zero: true on the function and the idle period is set globally for all functions.

Did you know? For Kubernetes, we wrote a new autoscaler which now allow functions to have their own individual scale-down timeout.

Logs from the faas-idler and gateway showing an idle function scaling up and back to zero after an invocation.

To deploy the faas-idler add the following config to your docker-compose.yaml file:

One of the strengths of faasd compared to OpenFaaS on Kubernetes is its sub-second cold start time. On Kubernetes, scaling up from zero can take a couple of seconds. In comparison, faasd uses containerd directly, which significantly reduces this cold start period.

We can deploy the figlet function from the OpenFaaS store and add the required label.

After leaving the function idle for the configured time period it will be scaled to zero replicas.

When we call the function after it was scaled down the container will be restarted and once it is ready the function will be called. This all happens in under 90ms including the round trip latency.

It is possible to limit the number of concurrent requests that your function can process. This can be useful when you are running memory intensive tasks and want to prevent overloading the function.

You can limit how many concurrent requests a function will accept by setting its max_inflight environment variable. When a function cannot accept any more connections it will return a HTTP status code 429. Handling retries for these requests can be a time consuming and tedious process, so the OpenFaaS Pro queue-worker handles this for us, with an exponential back-off algorithm.

You can configure which HTTP Status codes should be retried along with how many times in the queue-worker’s deployment.

Alex wrote an in-depth piece on how this works on the blog:

See also: How to process your data the resilient way with back pressure 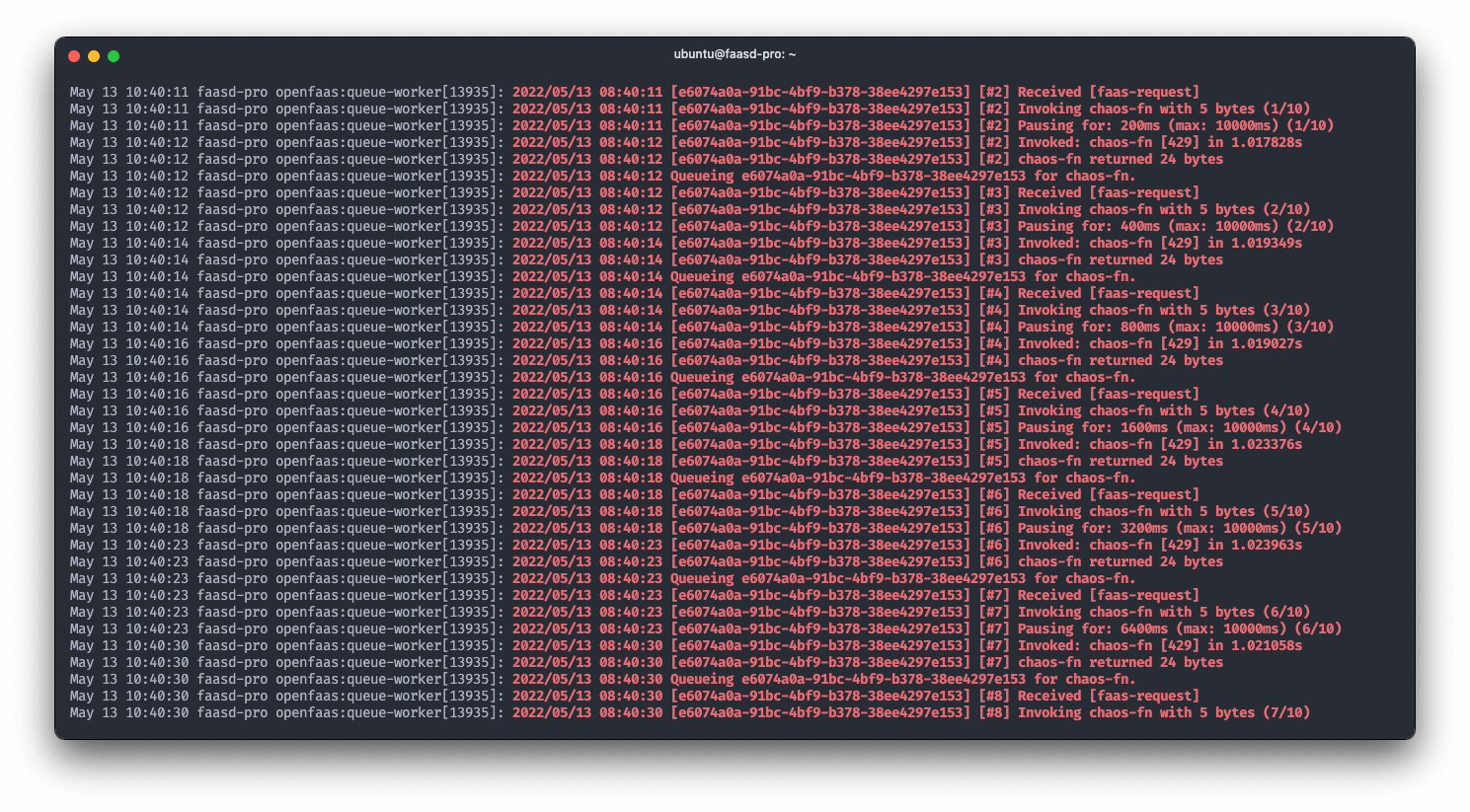 OpenFaaS Pro includes multiple event connectors. They allow you to integrate with different event systems. Currently we have a connector for Kafka and AWS SQS next to several open-source connectors for NATS, cron and MQTT. Our documentation on triggers has an overview of the different ways to trigger functions and how you can connect to other event sources.

The quickest way I found to try out the Kafka connector was by signing up for an account on Confluent Cloud. They offer a fully managed Kafka cluster that can be used for free during development.

Once you have your account setup we recommend you to run through their getting started tutorial. It will show you how to create a cluster, create a topic for your data and produce messages to that topic. The last step of the tutorial will show you how to set up their Datagen Source connector. It will generate mock data that we will process in a function.

If you want to use the code snippets we provide without modification you will have to create a topic named user.signup and configure the Datagen Source connector to produce Users data to that topic. Make sure to save the api key and secret you create during the tutorial. We will need them later on. 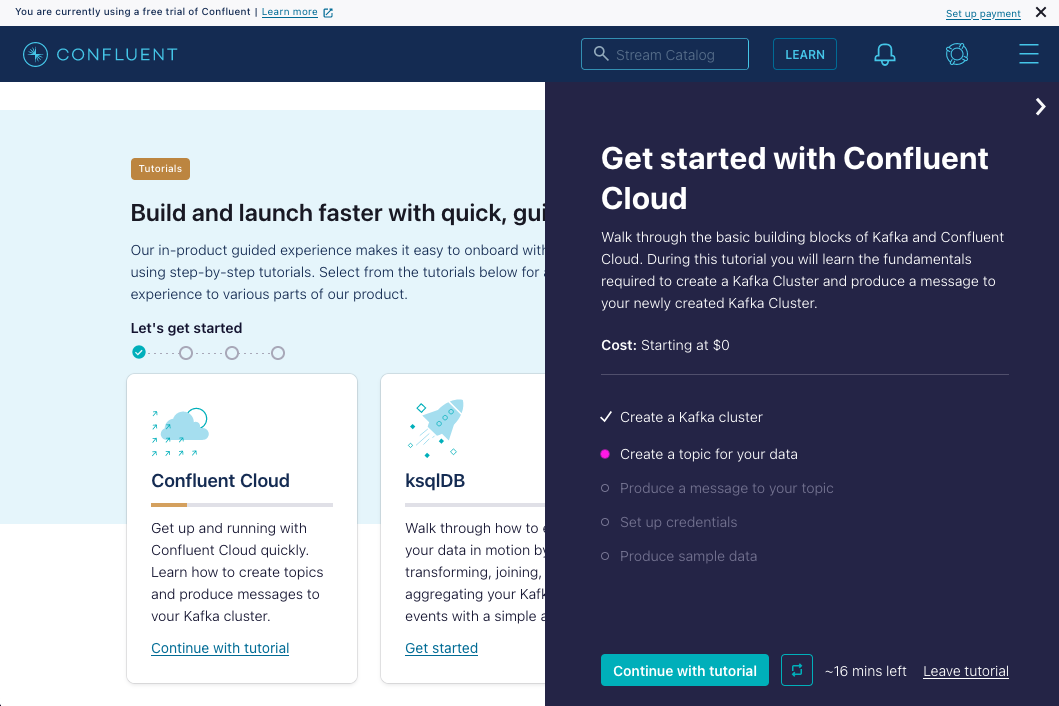 The getting started tutorial on Confluent Cloud

After you completed the tutorial and have your Kafka cluster setup, we can move on and configure the kafka-connector for faasd.

The kafka-connector will need to authenticate to your cluster. It will need to have access to the api key and secret you created earlier to do this. Save your API key to a file /var/lib/faasd/secrets/broker-username and the secret to /var/lib/faasd/secrets/broker-password. faasd will mount both files into the container running the kafka-connector. Makes sure you don’t leave any whitespace or newlines in the file after creating them.

You will have to edit some environment variables. Set the broker_host to the url of your bootstrap server and configure the topics you want to subscribe to. If you created the same topic as we recommended in the previous section this should be user.signup, otherwise set it to whatever you named your topic while running through the Confluent Cloud tutorial.

Consuming messages in a function

Now that we have both the cluster and the connector running we can deploy a function to start consuming messages from our topic.

We will create a new function using Python called user-fn. This function will parse the json data that is generated by the Datagen Source connector and published on the user.signup topic.

Our function has some third party python dependencies that we will need to add to the requirements file.

Edit ./user-fn/requirements.txt and add this line:

Now we can edit the function handler ./user-fn/handler.py:

Before we deploy our function we will add an annotation for the user.signup topic so that the function is invoked for any message received.

We can now build and deploy the function.

Logs of the kafka connector that show messages being consumed by the user-fn function.

I wanted to show you that whether you pick K3s, Kubernetes, or faasd, what we’ve built offers you the same experience and features.

We looked at some of the OpenFaaS Pro components and how they can be used at the edge with faasd. I showed you how to set up the kafka-connector on faasd and how to use functions to consume messages from Kafka topics. While OpenFaaS Pro comes with a lot of features you might want when running in production, the base version of faasd is a great way to get started. You can use it to deploy microservices, long-running tasks in the background with async functions or trigger functions from any kind of event. For more insights and tutorials on what you can do with faasd take a look at the following resources:

Using faasd to run OpenFaaS can be useful if you want to avoid the complexity of running and managing Kubernetes or when you just don’t need clustering capabilities. However, running Kubernetes at the edge is now also a possibility with K3s. Alex wrote a course for The LinuxFoundation called Introduction to Kubernetes on Edge with k3s. 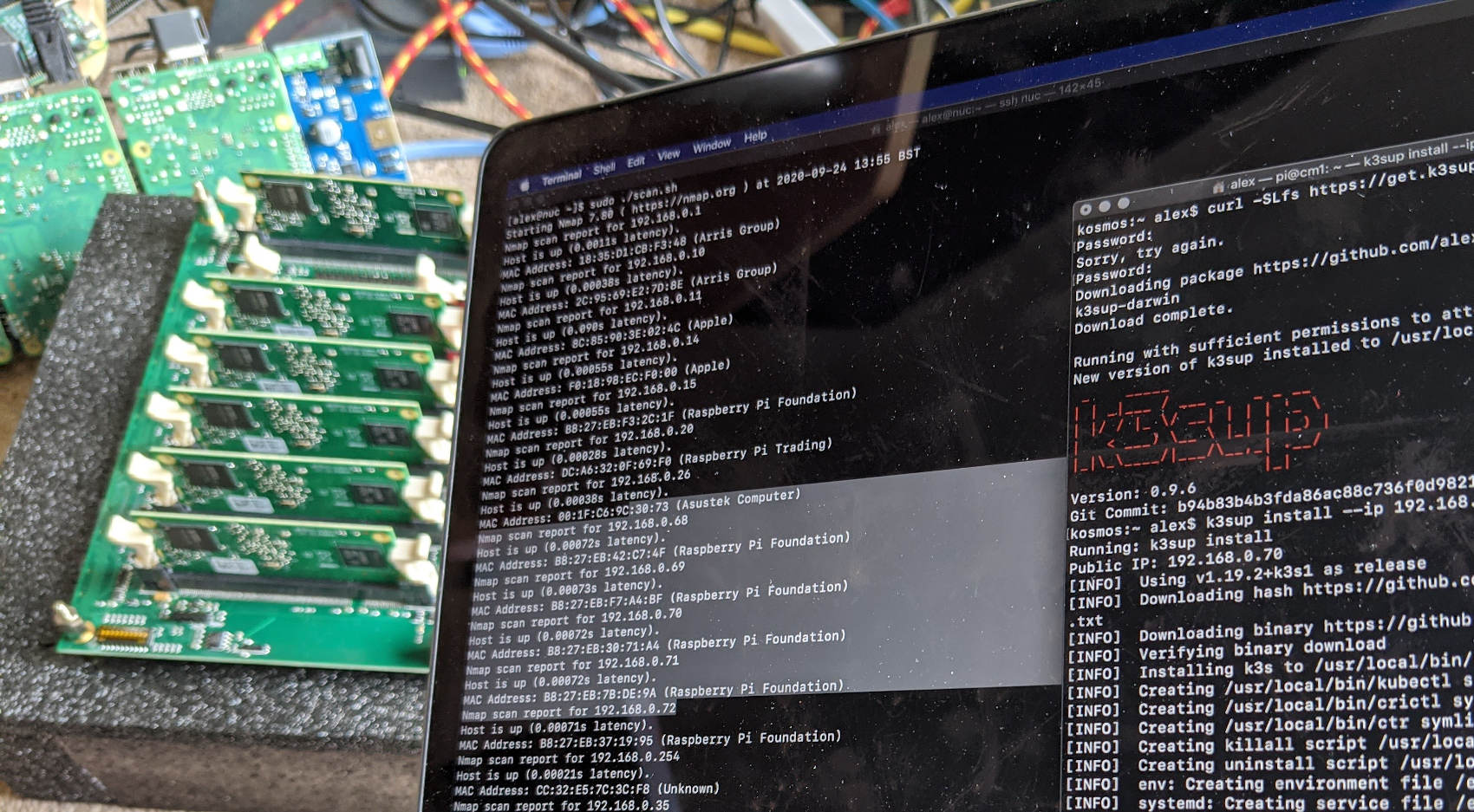 If you’d like to talk to us about anything we covered in this blog post: feel free to reach out at

We also run a Weekly Office Hours call that you’re welcome to join. 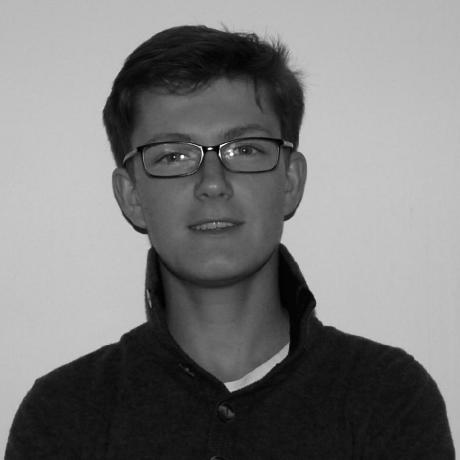