It was time to migrate our GitHub bot from Docker Swarm to faasd. Here's how we did it.

It was time to migrate our GitHub bot from Docker Swarm to faasd. Here’s how and why we did it including the Terraform we used that you can try out for yourself. There’s also some credit that you can use to try out the bare-metal from Equinix Metal cloud where we host Derek.

The story of OpenFaaS goes back to 2016 when I was learning more about serverless functions. I cut my teeth on AWS Lambda by writing functions for different Alexa skills, but something didn’t feel right. I wanted to be able to run functions in containers on my own hardware and with Lambda that option just wasn’t available. I felt locked-in and restricted by the limits, zip files and general workflow of the platform.

What did I do about it? I went about creating a prototype that eventually became OpenFaaS. I knew that it needed to be open source and that community contributions were important, but I quickly found myself having to explain the same things over and over again.

That was the moment I realised I needed to create Derek. He has a human name so that he’s more relatable.

An example of Derek’s governance feature for the DCO

Derek is a GitHub bot written in Go and deployed to OpenFaaS as a function. He responds to webhooks from comments, pull requests and other actions and can delegate permissions to other users.

Basically, he’s there to make my life easier and less repetitive. I also found that it deflected negative user responses away from me and towards Derek, and he has a thicker skin than I do, so everyone was a winner.

Derek started as a project to help me and the OpenFaaS community, but now other maintainers are using Derek and similar tools to help them too.

The Okteto team use Derek to create their release notes. Rather than having to integrate a GitHub Action to every one of your repositories, or run a language-specific tool like Goreleaser, Derek works on any public or private repository and every language.

Derek (@derekapp). He’ll do your release notes too.

If you want to customise the format, you can fork the code and tune to your liking. As we’ll see later on, Derek can run on a very modest VM with faasd and is easy to automate with Terraform. 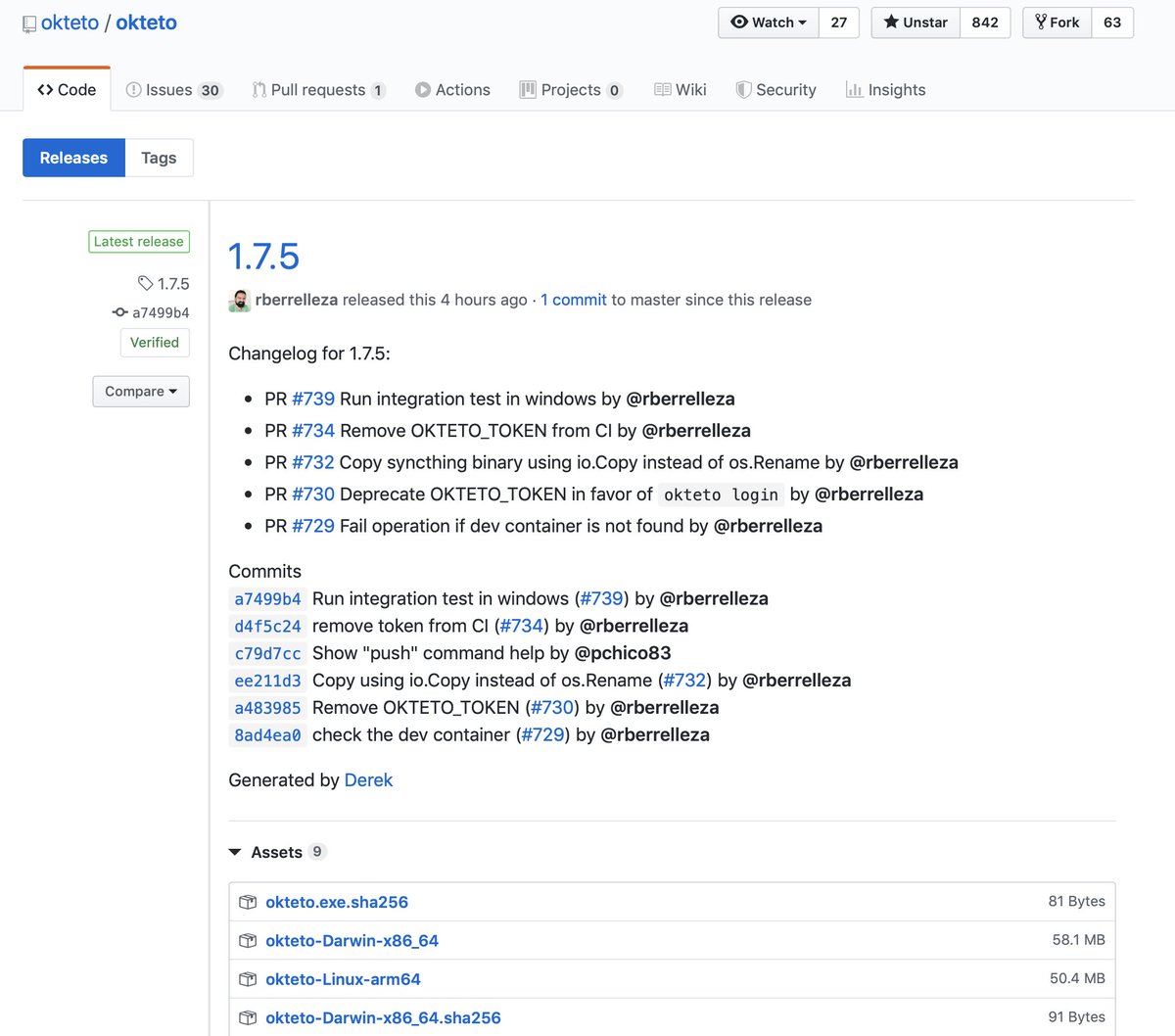 Over time Derek’s had contributions from various members of the OpenFaaS community and most of the regular contributors have had at least one pull request merged into his codebase. Derek works as a GitHub App, and these are notoriously difficult to set up, not because they are inherently complicated, but because they have so many moving parts - secrets, permissions, a public URL for the webhooks and so forth.

Why are we saying goodbye to Docker Swarm?

So I launched a managed service for Derek and offered it for free to the community. Since Derek dates back to 2016, Equinix Metal (then Packet) gave me a bare-metal server to run it on and I installed Docker Swarm there which was one of the supported platforms for OpenFaaS at the time.

Things change quickly in the industry, and I am sure that some people even consider containers and Docker to be a legacy technology at this point. Docker Swarm was Docker’s play for orchestrating containers over networks of Docker hosts. For various reasons, Google’s Kubernetes project became dominant and pushed out Docker Swarm and the other more established technologies like Apache Mesos.

I’m sure that there are still customers on Docker Swarm, and the fact that this week Derek was happily working way is probably a proof point for that. For the OpenFaaS project, which receives no funding or revenue from end-user companies, maintaining code to support Docker Swarm and Kubernetes created too much of an overhead. It was clear that our energies were better focused on where the industry was heading.

At the same time, individuals adopting Kubernetes struggled with the complexity and the sheer volume of additional services required to run hello-world. We’re probably talking of close to 30-40 containers to ship a REST API with a TLS endpoint. That’s where faasd comes into the picture. It uses the same low-level primitives as Kubernetes such as containerd and Container Networking Initiative (CNI), but has none of the extra clustering code. That makes it extremely cheap and simple to run a number of REST APIs or functions on a cheap VM or server. 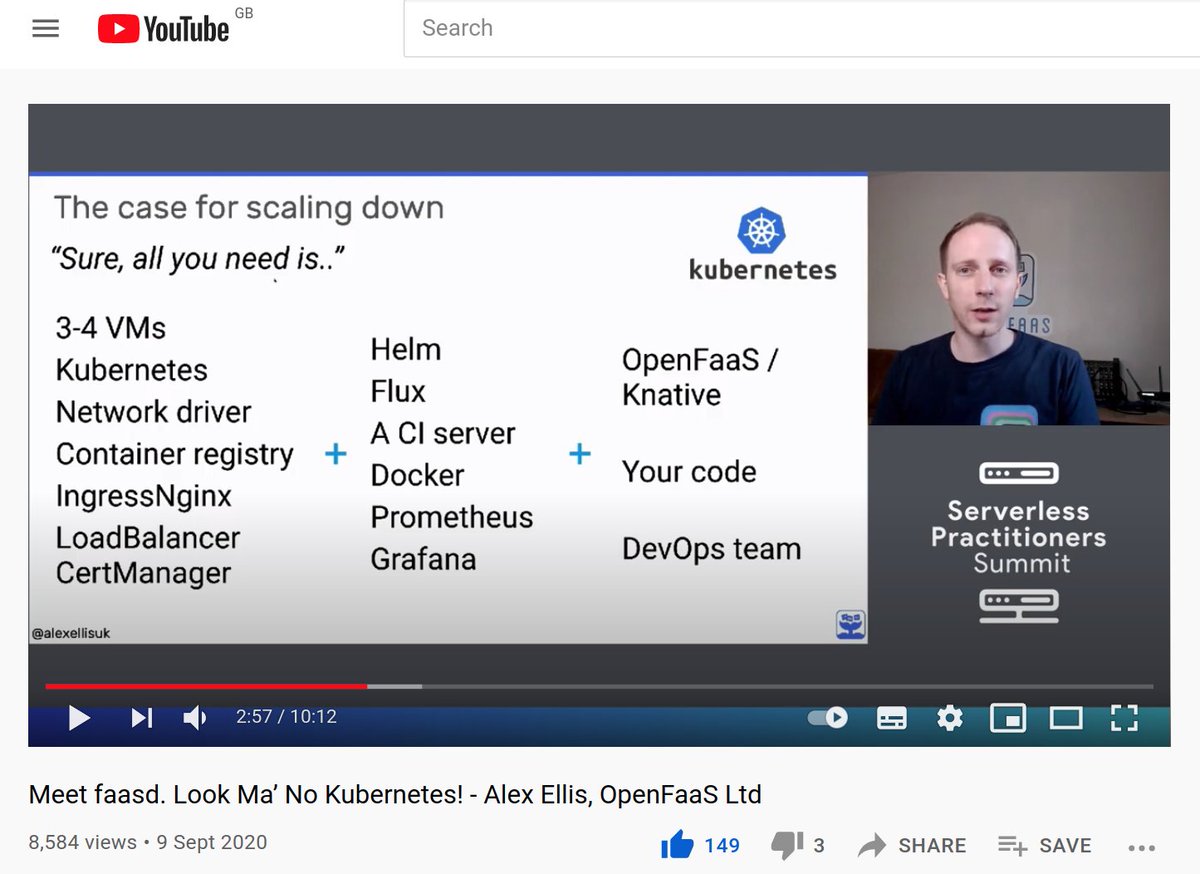 The case for scaling down from my talk at KubeCon

You can learn about faasd and how we were able to get it so much smaller and easier to use than OpenFaaS on Kubernetes.

I’ll now show you how to set up faasd on Equinix Metal’s bare-metal platform. If you’re a new customer you can get 200 USD of credit for free to kick the tires and see how it all works. faasd can also be deployed to any other developer cloud or a local VM using a tool like multipass.

We’re using Johan Siebens’ module for faasd and Equinix Metal. It abstracts and automates the installation of faasd using cloud-init and will return the URL and username/password for OpenFaaS after the machine is provisioned.

There is also an example for DigitalOcean in the faasd repository.

You’ll find example.main.tfvars here along with several other terraform files that we need to edit in order to provision a server with faasd installed.

The project field needs to be the name of the project as seen via the CLI or API, you can run metal project get to see a list of projects.

When I used to operate Derek on Docker Swarm, I used nginx and cert-bot to provide a reverse proxy, caching and a TLS certificate. With faasd we found it easier to use Caddy v2, so Johan’s automation script will set that up for us automatically, if we will out the domain and email fields.

I’ve picked the cheapest host c3.small.x86, but there are plans for developer pricing on the Equinix Metal roadmap. Follow them on Twitter if you want to keep up to date with news.

Then the metro field is equivalent to a region in other platforms. am stands for Amsterdam because I’m in Europe. You can use the metal CLI to view other metros:

Note: Do not commit this file to source control, it contains secrets that can be used to create bare-metal machines.

Equinix Metal have their own terraform provider, you can view the code here: equinix/terraform-provider-metal and the documentation is published here: Equinix Metal - Global, Automated Bare Metal Server Provider

At this point you should have the following printed out: the domain name and gateway URL for OpenFaaS, the username and the password. The TLS certificate for the domain should be valid too.

Use the command given to you to log in with the faas-cli, if you don’t have it yet, you can download it with arkade get faas-cli or using the instructions in the docs

If you want to open the OpenFaaS UI in a web-browser, you can do so by running echo $(terraform output -raw basic_auth_password).

faasd accessed via the OpenFaaS UI with the figlet function

In this test-run, I removed the Let’s Encrypt integration so you can just see an IP address. For the real migration I updated this and so my URL was something more like: https://derek.example.com.

Fortunately, each OpenFaaS provider, whether that was the deprecated provider for Docker Swarm, the new one for Kubernetes, or faasd itself are all compatible with each other, despite the underlying orchestrator being very different.

This is due to using a “provider model” whereby each provider for OpenFaaS is a REST API that conforms to a number of specific HTTP endpoints. You can find out more about the provider model:

There’s also a certification tool to prove that each provider is compliant with the interface: openfaas/certifier.

So deploying Derek was simply a case of creating the two required secrets: a private key for the GitHub App integration and a shared webhook secret from GitHub. Then cloning the Derek repo, and running: faas-cli deploy.

Adding a label to an issue with a slash-command 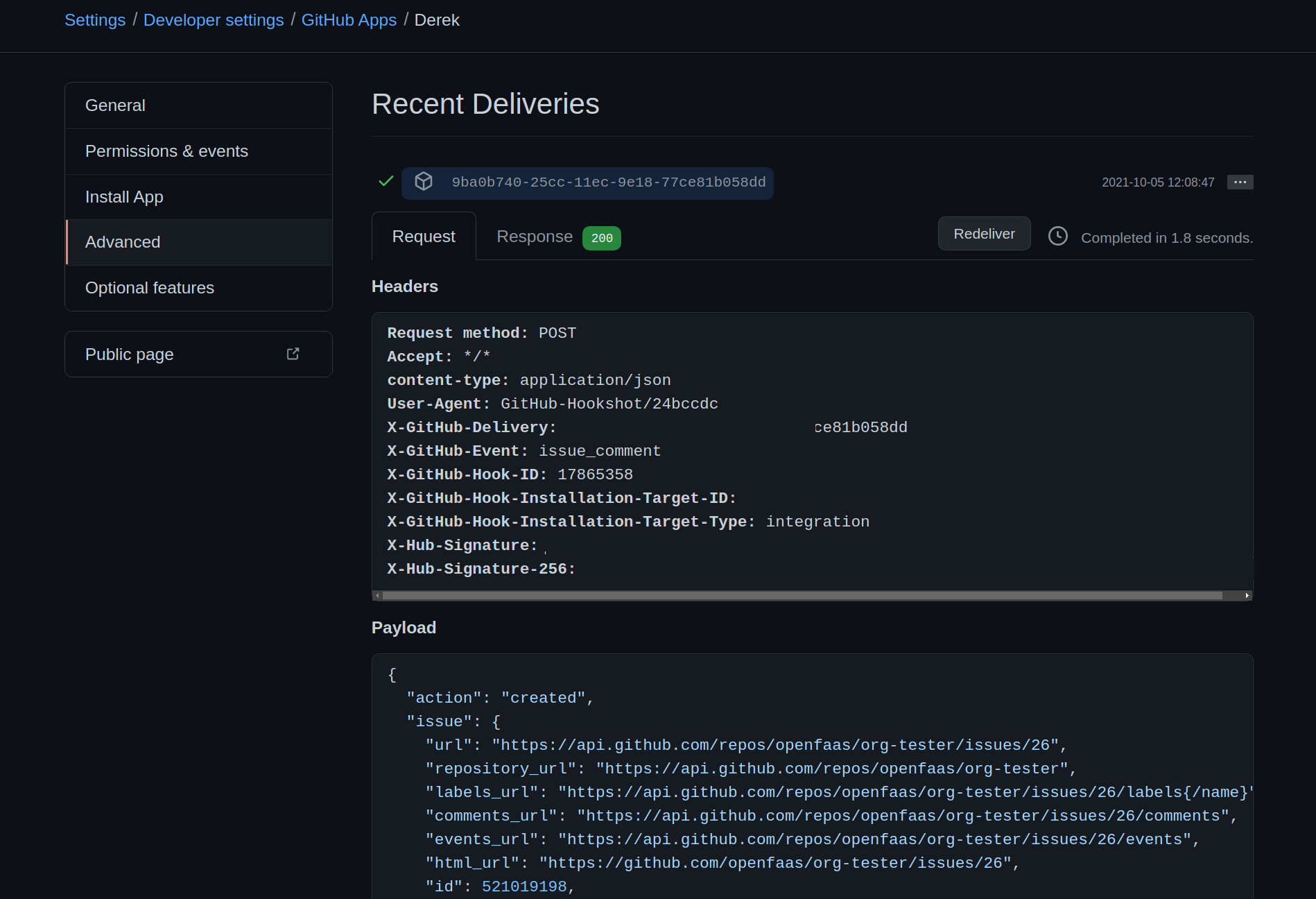 Derek’s first response after the migration

Did you know? There is also a Work In Progress (WIP) terraform provider for the OpenFaaS REST API.

The final step for moving over was to update the GitHub App so that it sent its webhooks to the new domain name.

If you ran the example and want to remove the resources allocated by terraform, you can run terraform destroy -var-file=main.tfvars.

The new #k3sup sticker and #arkade - @derekapp gains his own magnet.

What should i do with them? pic.twitter.com/EGaIT8L1wj

You can try out Derek on your repos by becoming a sponsor for OpenFaaS, then sending a Pull Request to add your organisation or repository to the “CUSTOMERS” file.

Derek is Open Source and there’s been 30 people who’ve contributed so far. That means that you can also help to improve the project either to learn more about GitHub and bots, or for your own use. Pull requests are also accepted, but please raise an issue first to discuss and propose any ideas or improvements that you have in mind. The contributing guide is deliberately short and sweet.

New customers can kick the tires with bare-metal hosts from Equinix Metal by using code: johngage for 200 USD of credit.

You may also like “The Internet is my computer” where I show you how to deploy a cloud IDE to Equinix Metal that you can access from anywhere, with more RAM than you’re ever likely to need. 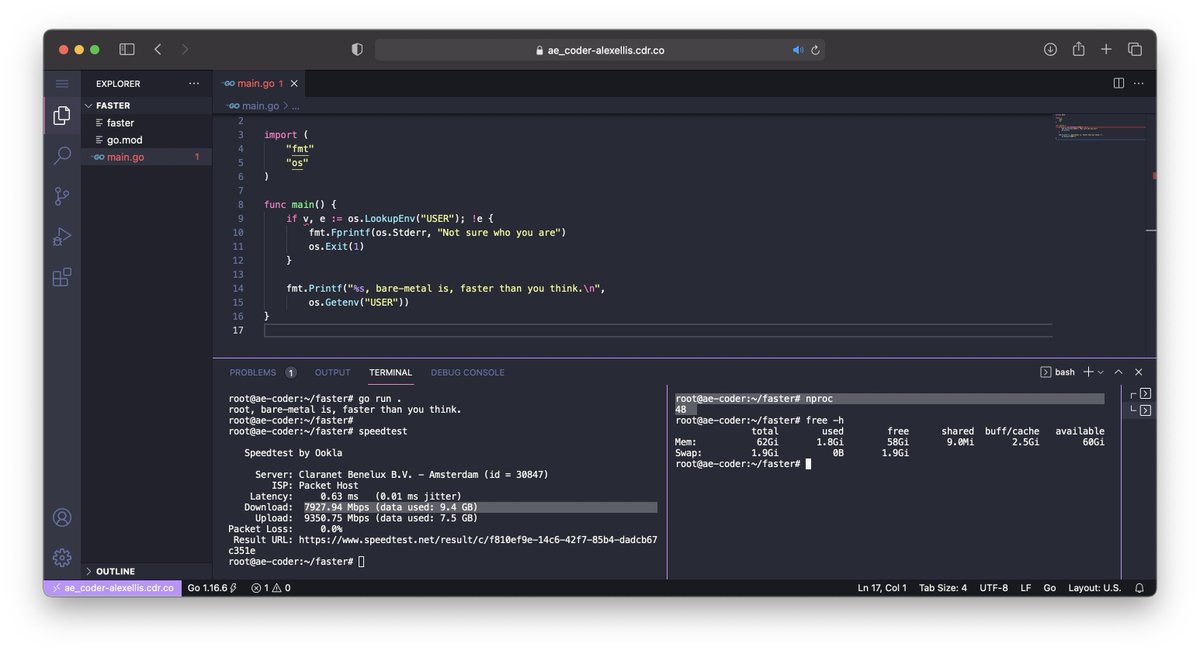 A cloud IDE launched with VSCode on Equinix Metal.

Use your credit to provision a HA, multi-master Kubernetes cluster using Terraform and K3s: Bare-metal Kubernetes with K3s -

Disclosure: Equinix Metal is a client of OpenFaaS Ltd and sponsors the compute and bandwidth for the hosted Derek service.