Ed Wilde demonstrates how you can enjoy a developer-first experience on Kubernetes and AWS Lambda without the worry of vendor lock-in.

Learn how AWS Lambda and OpenFaaS can play well together with the new provider called faas-lambda. You’ll learn how to deploy functions to Kubernetes and AWS with the same developer experience and workflow which is known and loved by the OpenFaaS community.

It was only a few months ago that I remember having lunch with Ed in a pub in the English country-side. We were throwing around ideas for a deeper integration between the AWS eco-system, and OpenFaaS. We wanted users to have more choice and to bring the OpenFaaS developer-experience to AWS customers. I’m excited to see how far Ed’s got so far and I’m excited about what we’ve been able to spin out as new projects for the ecosystem.

I’ll start by exploring some of the use-cases I see for running OpenFaaS functions on the AWS Lambda platform. Then I’ll take a look at some of the new components written to make this possible and how they work together. To wrap up, I’ll ask the community for feedback and input on the future of faas-lambda.

Why combine OpenFaaS and AWS Lambda?

You may be wondering what value there is in combining OpenFaaS with AWS Lambda. These are the top use-cases we came up with in the community:

Here’s a clipping from my presentation at the Serverless Practitioners Summit at KubeCon, Barcelona. It shows some of the differences between OpenFaaS on Kubernetes and AWS Lambda.

The great news is that you no-longer have to pick between one, or the other. You can get the best of both worlds with a single, unified control-plane.

OpenFaaS can be extended through the use of interfaces. The most common way to extend OpenFaaS is to create a provider.

You can use the faas-provider SDK to build your own provider for any back-end, even an in-memory datastore in a very short period of time.

To find out more about faas-provider read Power of Interfaces in OpenFaaS by Alex.

This interface is what inspired me to create faas-lambda. 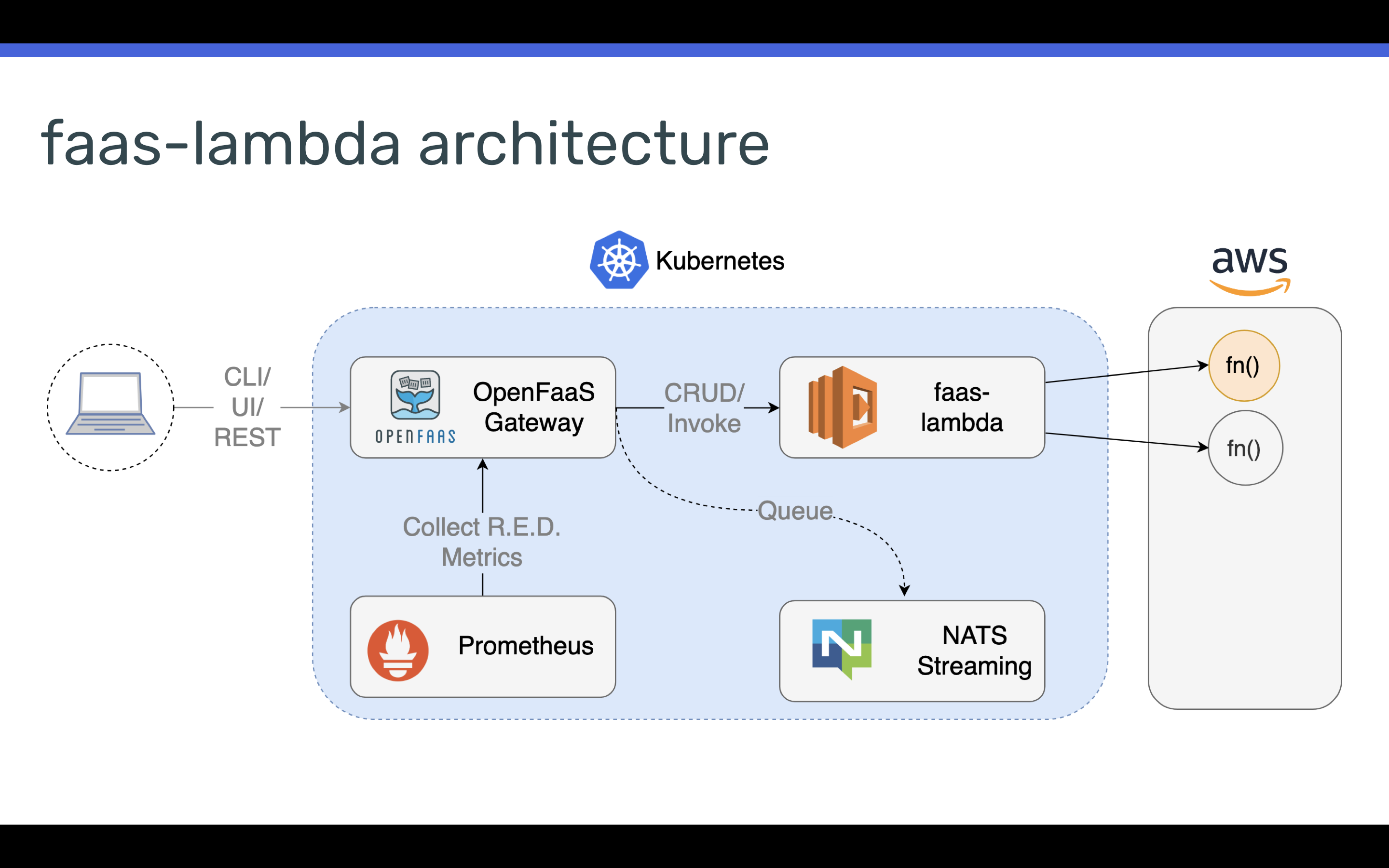 The provider I wrote understands how to translate requests from the gateway into appropriate responses in the AWS Lambda world.

In my reference architecture the faas-lambda provider runs inside a Kubernetes cluster as a Pod along with the existing OpenFaaS core serviecs. I then used the AWS SDK for Go to communicate with the AWS Lambda API. faas-lambda is currently configured to target a single AWS account per installation, so I store my credentials in a Kubernetes Secret object. When running with Amazon’s Elastic Kubernetes Service (EKS) it would be possible to remove the secrets and use IAM roles instead.

See also: kiam by uswitch, which can be used for IAM on EKS.

OpenFaaS functions are built into immutable Docker or OCI-format images, which are then stored in a registry such as the Amazon Container Registry (ACR). The first challenge I had was how to transform layers in my Docker image into an AWS Lambda package.

This is how I decided to approach the problem. There is also potential to use Lambda layers in the future, but for now the provider creates a single layer or archive per function.

Repackaging a Docker image to a Lambda

Note: Step 3 could be avoided by simply creating an OpenFaaS template with a signature that matches the AWS signature. In this exercise, we wanted to specifically offer interoperability with existing OpenFaaS functions.

This was an easier problem for me to solve. Using the AWS for Go SDK, we simply call the lambda function, passing in the request body we received from the client. We wait for the function to complete and proxy back the response.

You may have noticed that we’ve not needed to use the AWS API gateway. This can saving you money, reduce complexity and allow your function to execute for up to 15 minutes, which is the current AWS Lambda limit. If you use API gateway the current execution time is limited to 30 seconds.

The other thing this enables us to do is to return any content-type we like, including HTML. AWS Lambda at time of writing is limited to turning application/json. 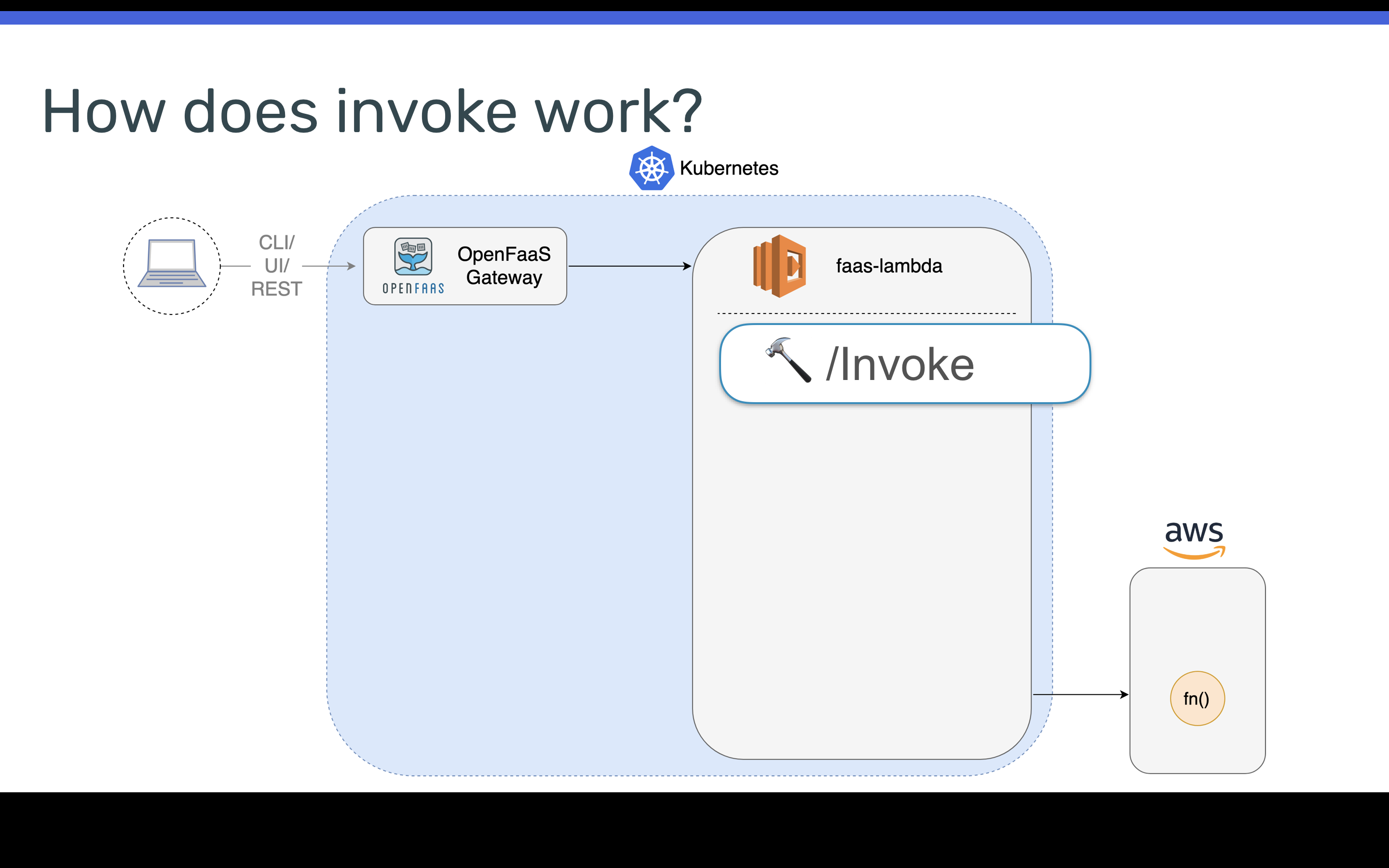 The new component allows us to run functions on AWS Lambda, or on Kubernetes. I wanted to find a way to have a single deployment of the OpenFaaS gateway which could target either platform using a scheduling hint or annotation such as “this function needs to go to AWS”.

I had a quick design session with Alex and we came up with the idea for faas-federation. 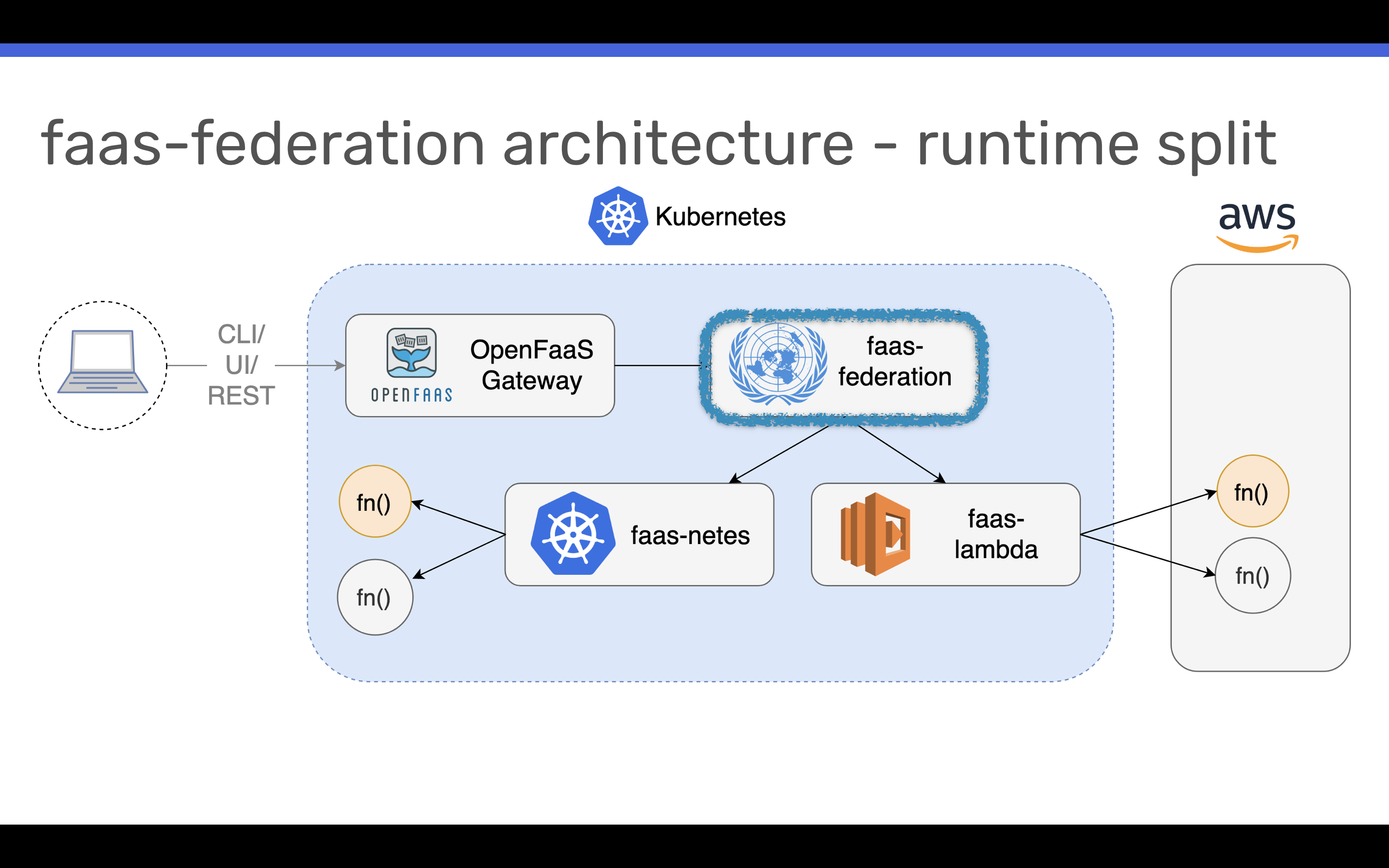 The faas-federation implements the same provider API that I used for faas-lambda and that is used by the core project for faas-netes (OpenFaaS on Kubernetes). So whenever an invocation is made or a deployment requested, faas-federation is in the hot-path and can act like a router, picking one path or the other.

We’re also excited about using faas-federation for implementing an East/West split and for bridging edge-locations to a larger control plane. Imagine that your Raspberry Pi clusters can tap into extra compute in a central location.

Whilst flying over to Chicago with Alex to present and run a workshop on Serverless Kubernetes, I wrote 90% of the code for a new provider called faas-memory. It allows any OpenFaaS platform developer or contributor to test against or develop against the OpenFaaS REST API whilst offline and without a real Kubernetes cluster.

This is how simple the code was for the “create” handler for the in-memory provider:

Contributions to faas-memory and faas-provider are both welcome and the projects are Open Source under the MIT license.

Here’s a demo of it all put together. I’ll use OpenFaaS to deploy, manage and invoke functions on both Kubernetes and AWS Lambda:

Language support for Go, Node and Python is available and we will be adding more language support through the use of the Lambda Custom Runtime. You’ll have a chance to register interest below.

Contributions to faas-memory, faas-federation and faas-provider are both welcome and the projects are Open Source under the MIT license.

Here are some of the projects we’ve talked about

To register your interest and give feedback sign-up below:

Are you using OpenFaaS in production? Join the end-user community or sponsor the project to give back. Financial backing is required to ensure its on-going.

If you have comments, questions or suggestions or would like to join the community, then please join us on OpenFaaS Slack. 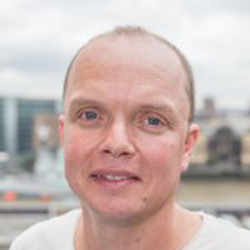