Adding Managed Services to Serverless with Crossplane and OpenFaaS

In this post Dan from Crossplane explains how to easily deploy and consume managed services alongside your serverless functions on Kubernetes using Crossplane and OpenFaaS.

I’d like to introduce you to Dan Mangum who is our guest-writer for today’s end-user blog post. Dan will be recapping a recent live stream where we showed off two demos using Crossplane with OpenFaaS to deploy and consume managed services alongside serverless functions.

Author bio: Dan Mangum is a software engineer at Upbound where he works on the open source Crossplane project. He also serves on the Kubernetes release team, and is an active contributor to the Kubernetes project and multiple other open source efforts. He hosts a biweekly live stream show, The Binding Status, focused on extending Kubernetes, building Crossplane, and shaping the future of cloud-native computing.

Kubernetes is often seen as complex and confusing for new and seasoned users alike. While it provides a wealth of tools and functionality for infrastructure operators, developers frequently struggle to navigate the complexity to just get their application running. OpenFaaS eases that burden by providing the fastest way to get your code running on Kubernetes.

However, while OpenFaaS addresses the problem of getting your code to production, providing data for your functions is a different beast entirely.

Typically, the provisioning of managed services such as databases, queues, and caches follows a much different cycle than the deploying of an application. You must either use a cloud provider console, an infrastructure as code tool, or run the service directly on your Kubernetes cluster. Each of these methods have tradeoffs:

Ideally, we would want to take the benefits of each of the options above while stripping away the negative consequences of pursuing any one of them directly. While I don’t believe in silver bullets, Crossplane goes a long way in accomplishing this mission. Let’s take a quick look at some of the principles of the project:

Now that we have an idea of the value that Crossplane provides when used alongside OpenFaaS, let’s run through our two demos for tangible examples. 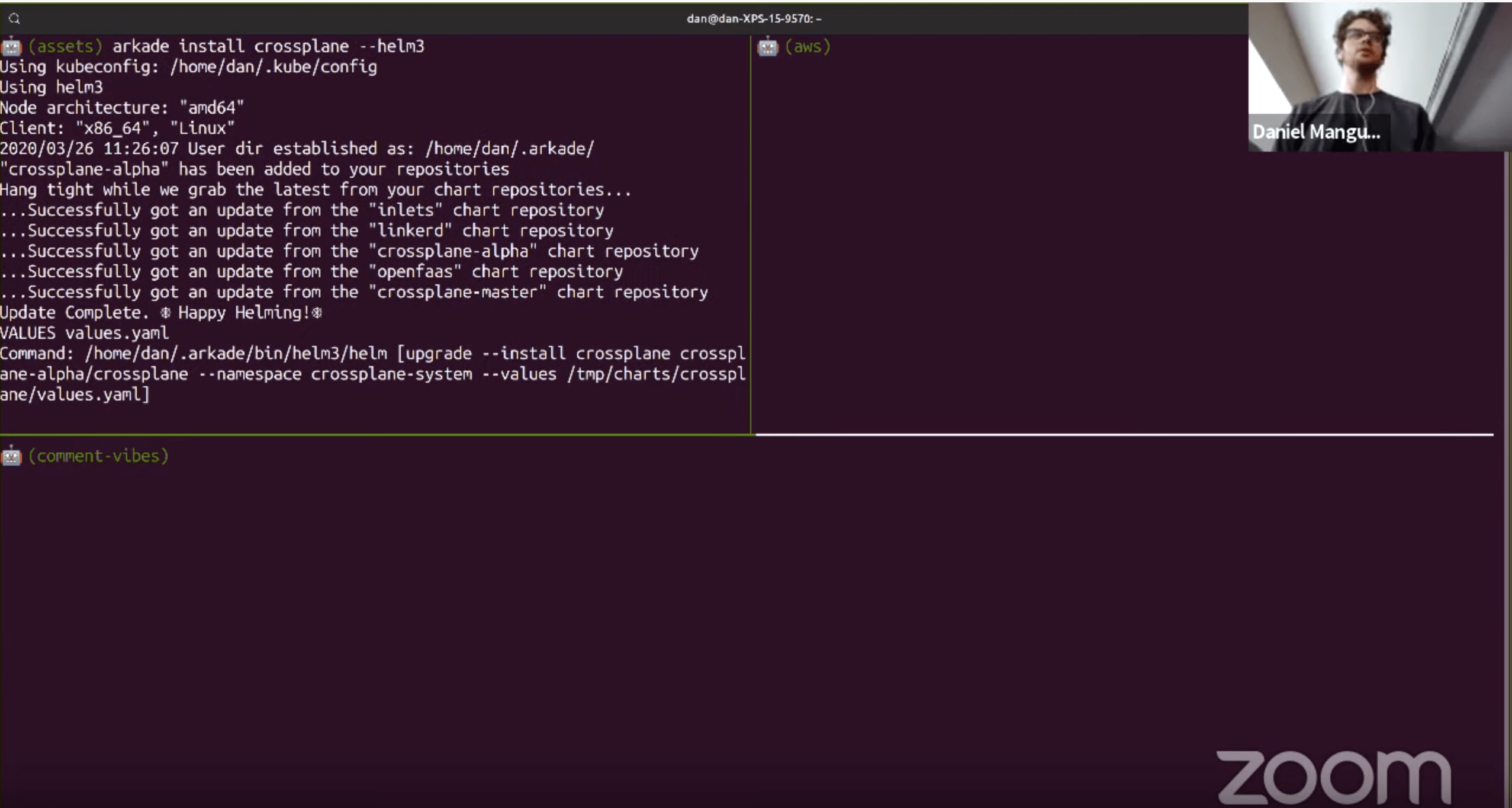 We started the demo by installing Crossplane with arkade, the simplest way to get Crossplane up and running in your Kubernetes cluster.

We followed up by installing the Crossplane AWS Provider and supplying credentials for Crossplane to communicate with the AWS API. You can find documentation on how to do this for your cloud provider of choice in the Crossplane documentation. After that, we created an AWS S3BucketClass resource in our cluster. This is a custom resource type that Crossplane provides to allow an infrastructure administrator to define configuration for an Amazon S3 bucket that is available for use by developers. This class exposes the same fields that you would find in the AWS console, or when using any infrastructure as code tool. Our configuration for this demo looks as follows:

Developers can now request object storage with a Bucket claim, which is not specific to AWS, but can be satisfied by the S3Bucket type as it is a form of object storage. Before we got to that, we went ahead and installed OpenFaaS, once again using arkade:

After logging in and accessing the OpenFaaS UI, it was time to actually provision our Bucket. We could see that once the S3 bucket was created on AWS, our Bucket object reported Status: Bound and its connection information was propagated in the form of a Kubernetes Secret to the openfaas-fn namespace: 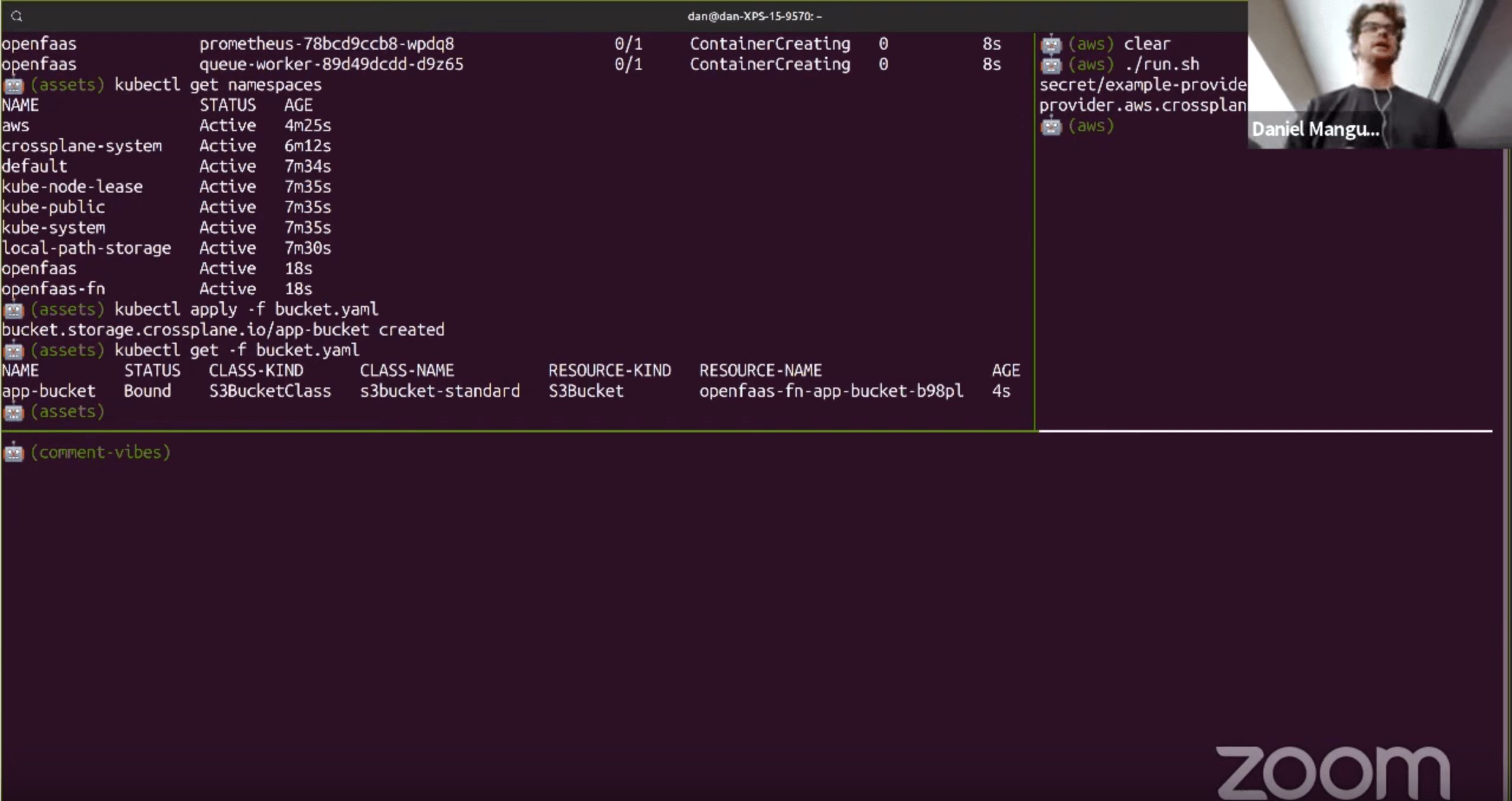 Now all that was left to do was deploy our OpenFaaS function to allow us to upload images and view the bucket contents. Using the faas-cli, this was as easy as faas-cli deploy -f tbs.yml, and our functions immediately appeared in the OpenFaaS UI. 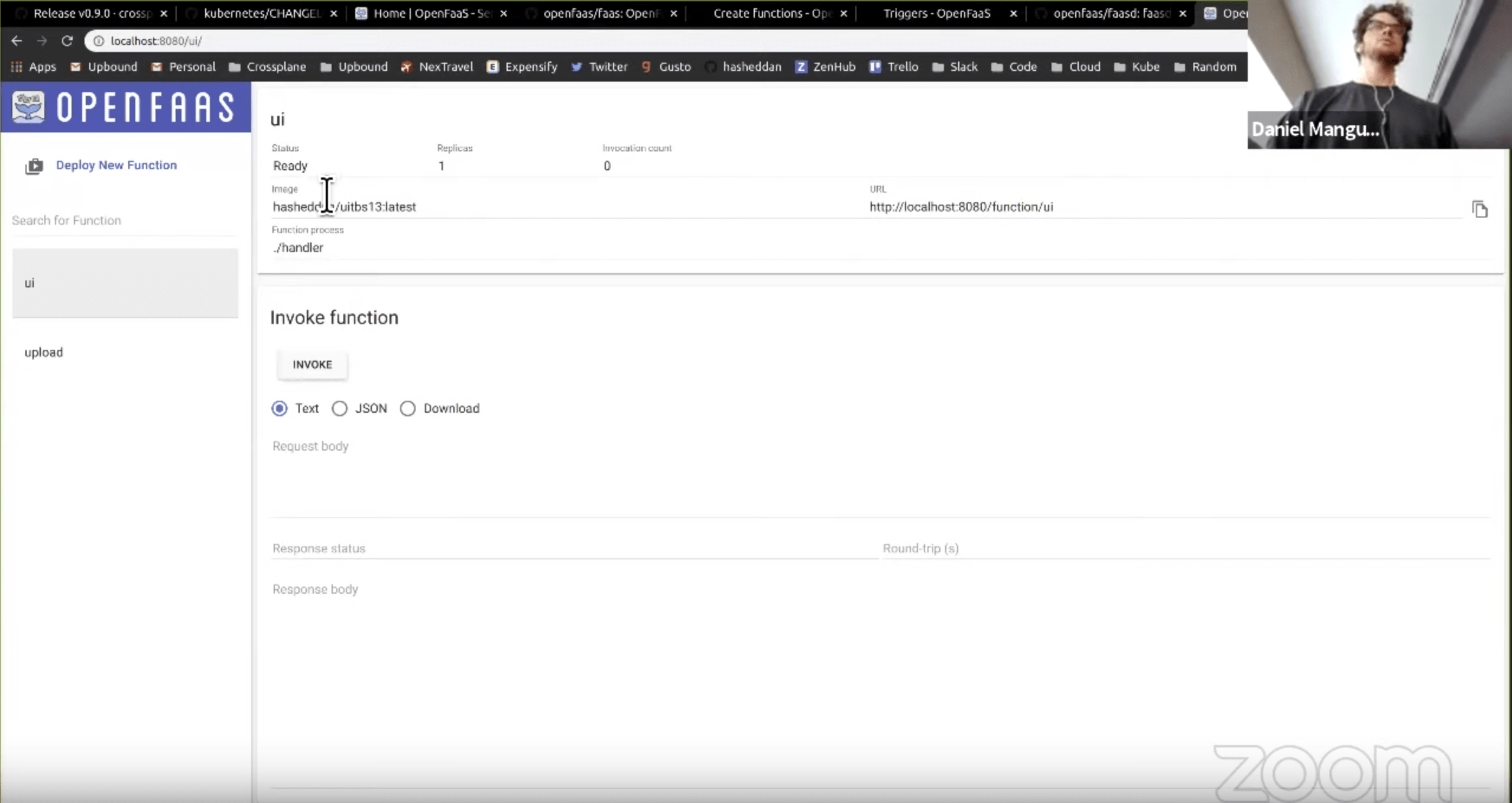 We then used [curl] to post an image the uploader function: 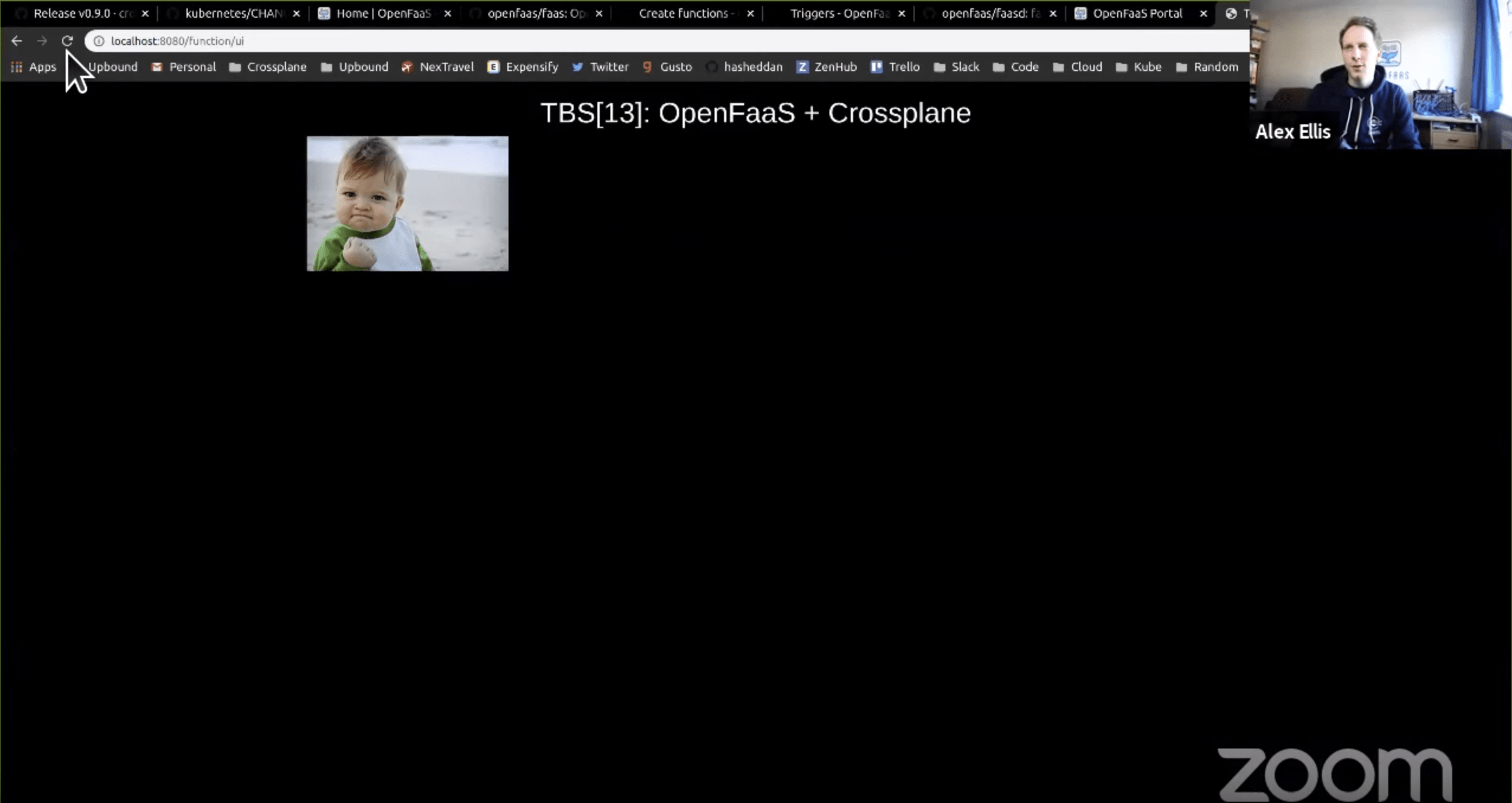 Feeling adventurous, we even publicly exposed the function endpoints using inlets. Watch the remainder of the video to see how we did it!

Already having Crossplane and OpenFaaS open and running, why not move on to another interesting application? Alex had put together the Comment Vibes app to show how OpenFaaS functions can be used with Github and a Postgres database to display emoji reactions in comments. The application was originally demoed by Alex at an online meetup by provisioning a Digital Ocean database using the cloud provider console. However, we wanted to show how we could simplify this workflow using Crossplane.

After setting up the Crossplane GCP Provider, we created a CloudSQLInstanceClass with configuration for a Postgres database on GCP. The contents of the configuration looked like this:

As you can see, a Postgres database is a bit more complicated than an object storage bucket, but this level of detail is once again confined to the infrastructure operator, while the developer simply creates a PostgreSQLInstance claim that can be satisfied by the CloudSQLInstanceClass. The contents of the claim are significantly less verbose: 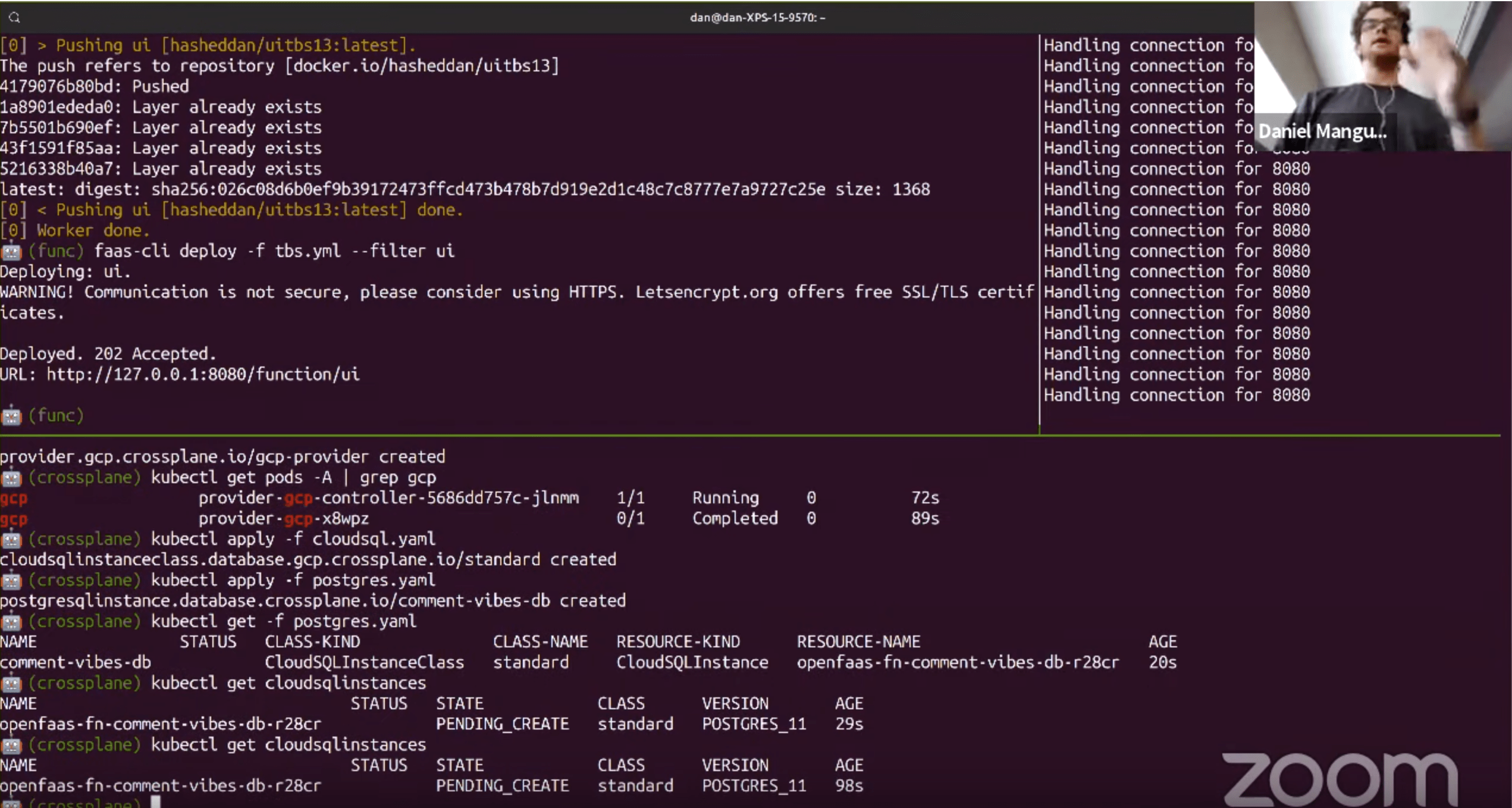 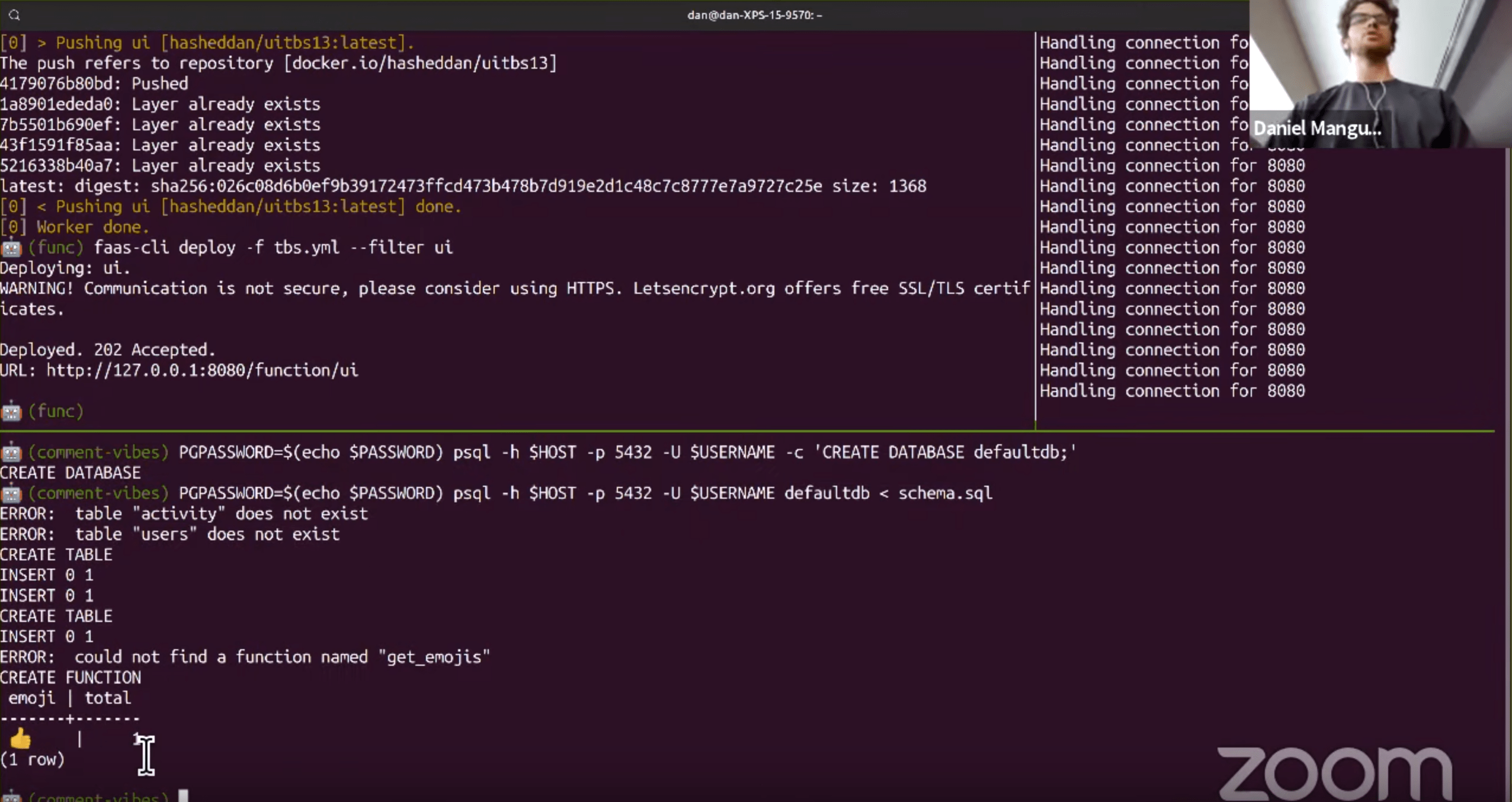 Now our functions were ready to consume the Postgres database, so we deployed them using faas-cli deploy. The next step was relying on inlets again to publicly expose our endpoint so that Github could the import-comments function as a webhook to send events. Alex set up the webhook and Github issue while I exposed the endpoints using the inlets client. 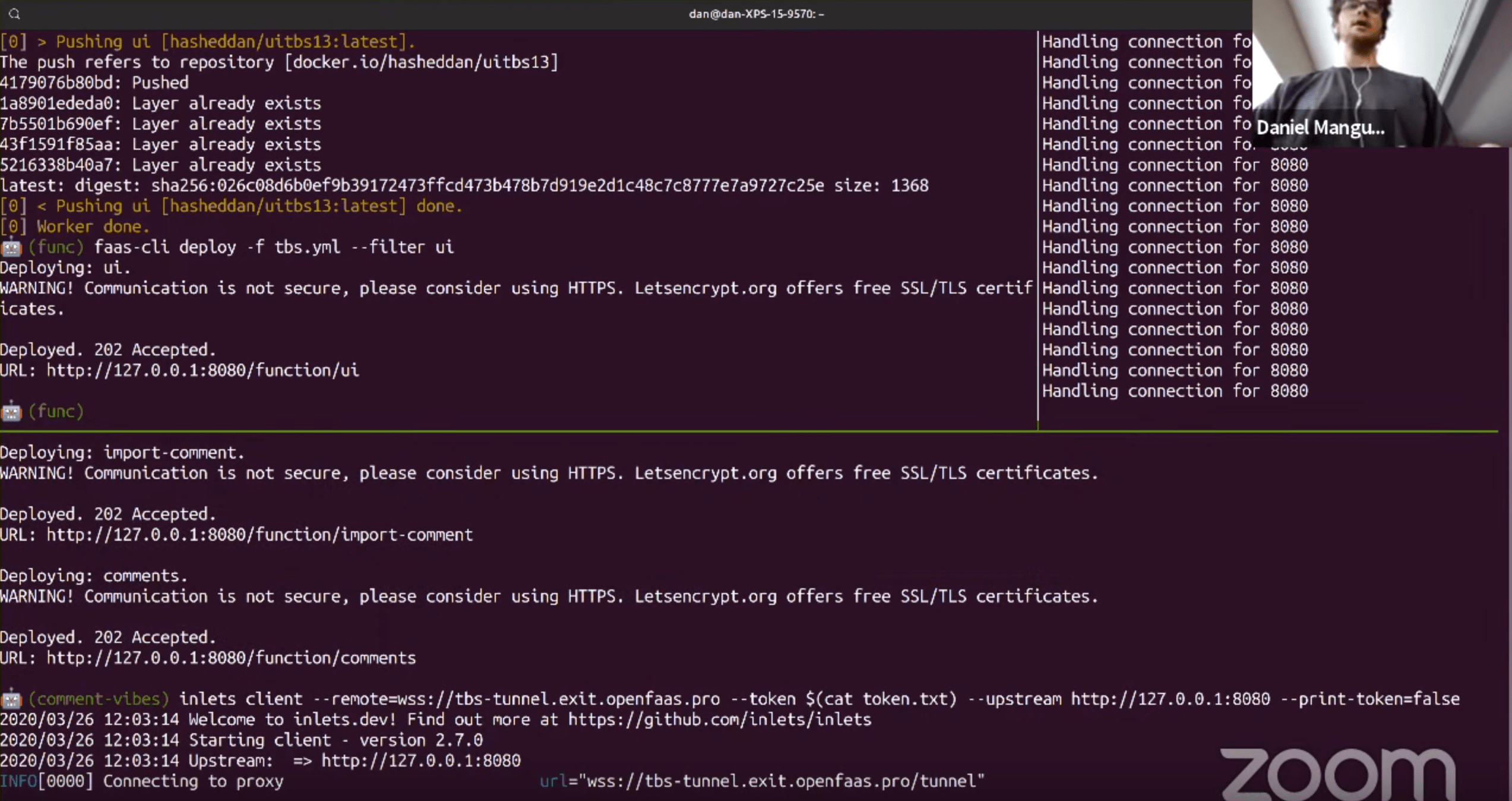 We finished up by sharing the issue link the the live stream audience, then watched to see which emoji rose to the top. 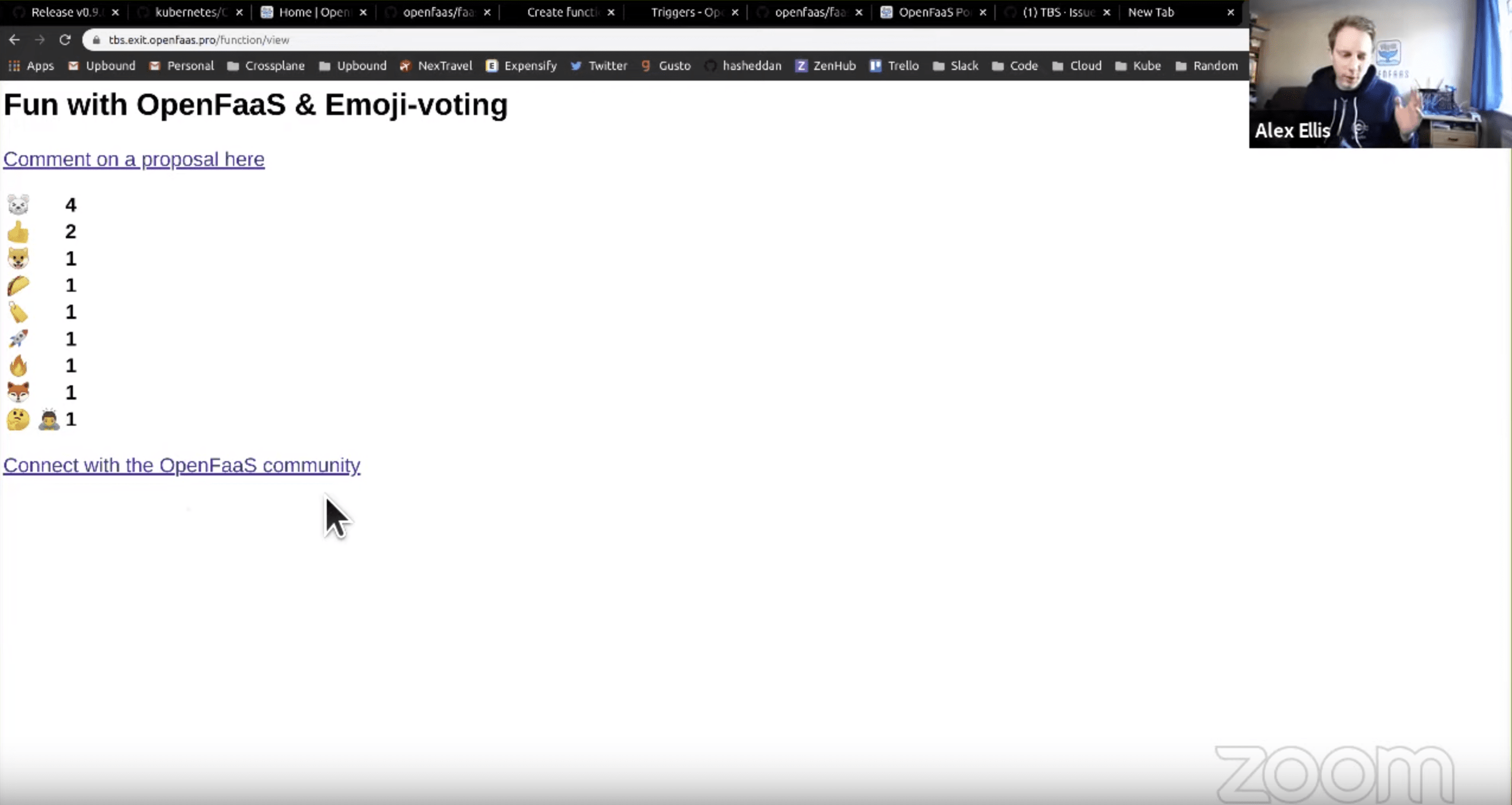 If you enjoyed these demos, watch the full live stream to hear Alex and I dive into the implementation details of Crossplane and OpenFaaS. Alex also answers questions such as “What is it like to build software for multiple platforms?” and “How do you organically grow an open source community?”.

The demos in this post illustrate the benefits of standardizing on the Kubernetes API as Crossplane and OpenFaaS were able to natively share connection information using the common Kubernetes Secret format. They also demonstrated the separation of concern and portability that Crossplane strives for, isolating the configuration and provisioning of managed services into two distinct operations.

Bringing together Crossplane and OpenFaaS creates the easiest path for deploying both your code and your managed services on Kubernetes. These two demos show interesting use-cases, but the beautiful thing about both projects is that they are built to be extensible. Whether you are building new OpenFaaS function triggers, adding support for a new managed service on Crossplane, or just bringing the two projects together to get your application up and running, feel free to reach out to me directly.

Otherwise, bring your thoughts, questions, and feedback to one of our many forums: