Learn how you can write your own data-driven GitHub badges for your projects and codebases on GitHub using Node.js and OpenFaaS Cloud

Learn how you can write your own data-driven GitHub badges for your projects and codebases on GitHub using Node.js and OpenFaaS Cloud

I’ll show you how I built my own data-driven GitHub badge with Node.js and OpenFaaS Cloud, at the end of the post you’ll find some ways you can engage and try it out for yourself. I’ll also mention several real-world case-studies where others are already making use of OpenFaaS Cloud to innovate and solve problems.

GitHub badges are graphics that you can add to your README.md to bubble up key information. Not all GitHub badges are created equal, but most big projects make use of them and in the OpenFaaS community we are big fans.

Examples of data you can show includes:

Here’s an example from the openfaas/faas GitHub repo showing a range of badges:

Since OpenFaaS is written in Golang, we include a number of other interesting badges, like the generated Go documentation and a “go report” which has given us an A+ on quality. Each link can also navigate to a webpage where you can find out more.

How do badges work?

My inlets project also includes downloads statistics from the GitHub releases API. Inlets is an open-source replacement for Ngrok, or Cloudflare Argo, but without any limitations and a deep integration into Kubernetes.

How does this specific badge work? It’s hard to say exactly, because the badge is provided by a third-party called shields.io. I would imagine that some server-side or client-side code polls the GitHub API for downloads.

Static badges can be formed very simply and are a good way of indicating some kind of status or affiliation. The OpenFaaS Cloud dashboard offers that kind of badge:

To create a static badge simply write the following:

Whatever text you enter in the URL will be read by shields.io to generate data.

Use-case: How do I make my own?

You can pick one of the pre-made examples from shields.io, and that may cover your needs, but when you need more, you can build an endpoint to return your own.

I decided to build a badge that would show how many features a GitHub repo is using from a bot I maintain called Derek. Derek is modular and comes with around a dozen commands and features to help companies manage community and GitHub.

Here’s a summary of what Derek can do once installed on your GitHub repo or organisation:

All of Derek’s features are designed to automate and save you time as an OSS maintainer.

Here’s an example of the dco_check feature in action, which saved one of the maintainers from contacting the person submitting the PR to ask them to sign-off their code. They got the message from Derek and fixed it before we even got to it:

The new release notes feature is in action below, too:

I wanted to create a badge which would count how many features a repo is using and then show that as a badge. You may have your own data and config files you can read and report back on.

How I built the code

I started off by building my function for OpenFaaS Cloud on The Community Cluster, which provides free TLS-enabled URLs which are public. All you do is put code into a GitHub repo and the rest is automated.

Each time I want to change the code I simply type in the following and wait a few seconds.

And a new version of my code appears with its URL and detailed statistics: 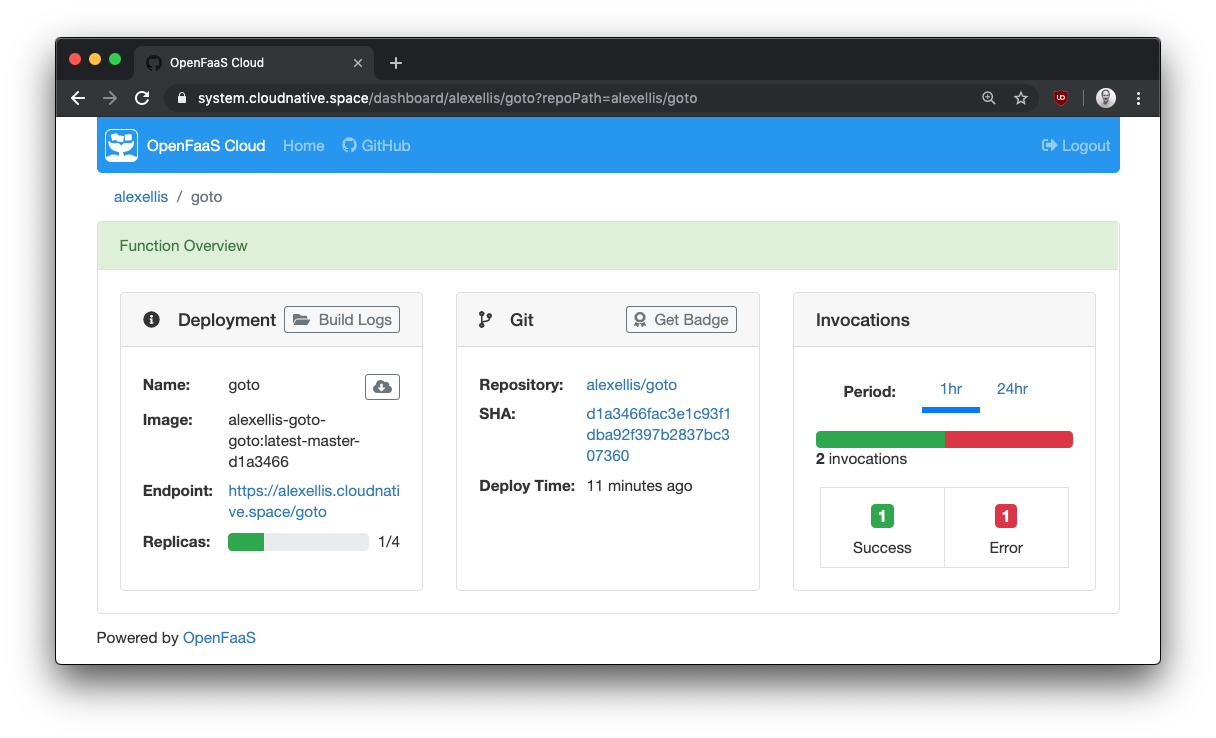 If anything went wrong, GitHub provides me with GitHub statuses and error messages: 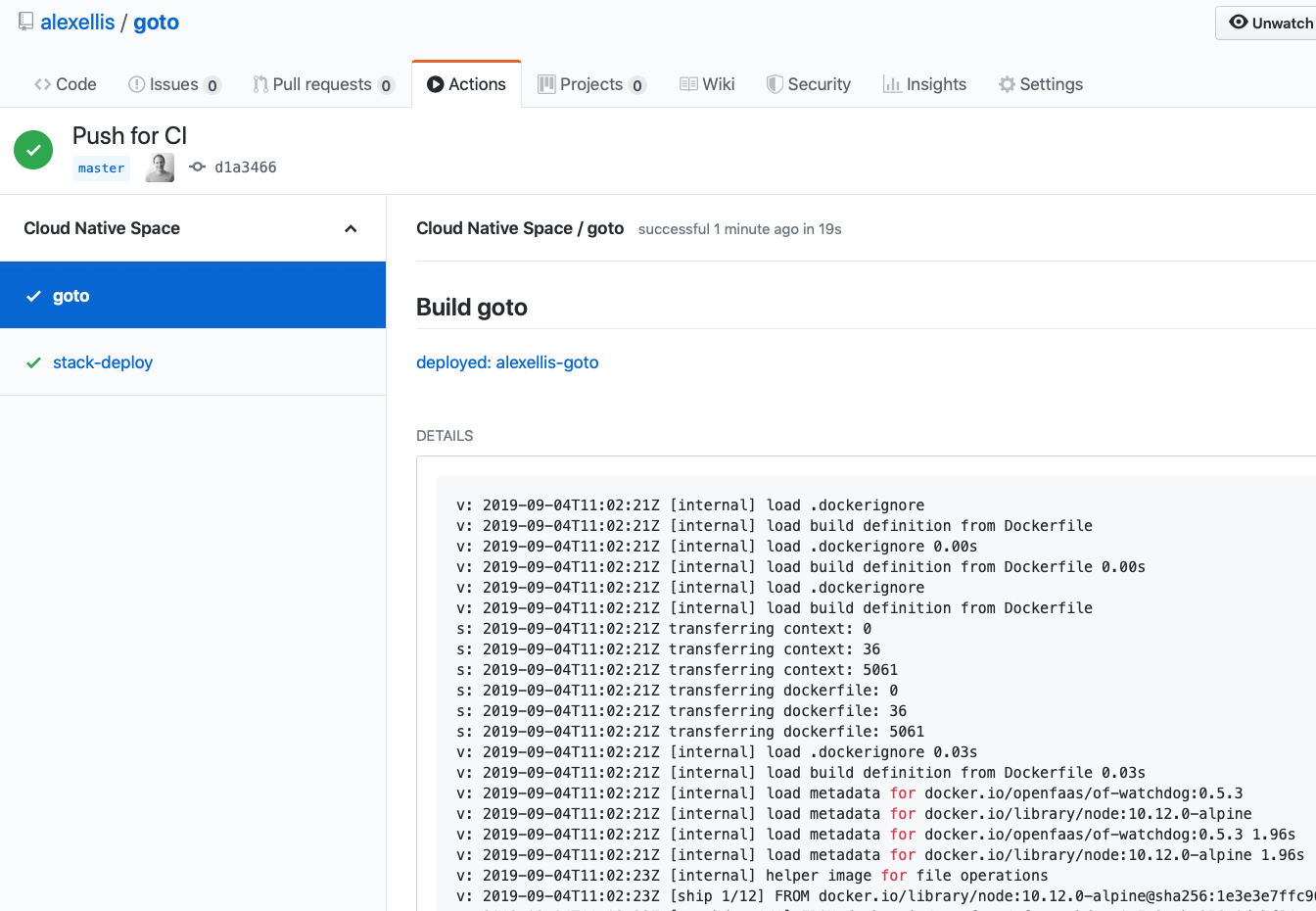 To test the code I wrote a “stub” that I could use to invoke the code. There’s nothing stopping us going deeper here and using chai and mocha (common testing tools for Node.js) to write a full test suite against a fake or mock HTTP server.

Since I was short on time I wrote a quick tester.js file that I could run in the terminal:

After proving that a repo with a redirect worked and a repo with a top-level Derek file worked, I made a commit and pushed my code up into OpenFaaS Cloud.

See it in action

Try it out for yourself by viewing these GitHub repos:

What else can you do?

Now that you have a worked-example, you can go on to customise the code and build your own GitHub badge. There’s also nothing stopping you from generating images dynamically which you can embed in your README file without using shields.io at all.

I often have the need to embed a YouTube video in a newsletter, but I can never remember the secret URL to get a thumbnail from the video, which YouTube.com provides. What about writing a function that would look up the YouTube URL and then redirect? That is something you could probably write in 15 minutes and then host for free on The Community Cluster. You’d have a public URL with TLS and full CI/CD all for free.

Here are a number of case-studies from The Community Cluster:

Rajat Jindal from Proofpoint has written two bots which he hosts on The Community Cluster:

Tarun Mangukiya from Iconscout made a version of his image resize available on The Community Cluster for free use too:

The UK-based cloud company Civo.com has an OpenFaaS function on The Community Cluster which filters Twitter mentions and then forwards them onto their Slack community so that the team can engage better with their own community:

This is just scratching the surface of what can be done. OpenFaaS can provide a quick and easy way for you to host anything including microservices, integrations, APIs, or even static sites.

The OpenFaaS community values are: developers-first, operational simplicity, and community-centric.

If you have comments, questions or suggestions or would like to join the community, then please join us on OpenFaaS Slack.

« Migrate Your AWS Lambda Functions to Kubernetes with OpenFaaS Meet us at KubeCon San Diego! »