In this post I’ll highlight one of the ways we’re making OpenFaaS a more secure environment for your production functions and workloads.

What is a read-only function?

All functions deployed to OpenFaaS are first built into immutable Docker images. We do this so that you get exactly the same results wherever you want to run your code. Read-only functions are functions which run with an enhanced security profile so that users cannot make changes to the underlying file-system in the container. This protects the underlying filesystem, shared libraries and the code for the function.

We also use a read-only file-system in the OpenFaaS API Gateway which provides a REST API and user-friendly UI for your functions.

How does it work?

Before applying this patch to the OpenFaaS providers we also changed all the OpenFaaS templates to run as non-root users to prevent tampering with system files, installing packages at runtime and modifiying shared libraries. This change goes one step further and prevents a function from tampering with its own code either through a malicious actor or an inadvertent defect in the code.

In both Kubernetes and Docker Swarm, we enabled features in the built-in container security contexts to make the root file-system / read-only.

To see this in action with a regular Docker container try the following:

A read-only file-system is highly recommended for your functions to prevent tampering. 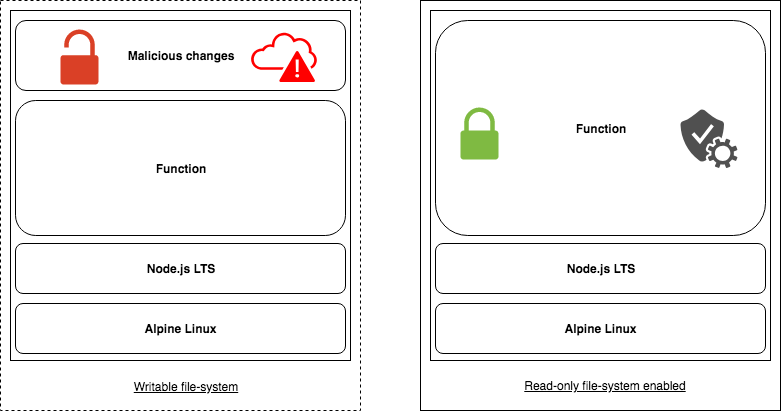 Above: Conceptual diagram showing an altered container and a read-only container

This feature is released and available with the latest versions of OpenFaaS including the CLI (0.6.17), Kubernetes and Swarm.

We’ll create a function named access-control which can be invoked over HTTP. It will tell us which user has access to our system. The user with access is alexellis and that will be hard-coded into the function’s Docker image.

Let’s also add a back-door where by a querystring of update=1 means the code will try to overwrite the value for our chosen user.

The example code will be available on GitHub here.

You can now deploy the function and query the valid user, then try to update it.

Now let’s apply a read-only root file-system and see what that looks like.

Edit your function’s stack YAML file and add a property of readonly_root_filesystem with a value of true:

Now deploy the function and try to update the value to “stefanprodan”:

You can now see that the value is never updated and an error is generated.

Read on for what to do if you do need somewhere to write some temporary data such as a process identifier number or other kind of intermediate data.

What if I want to write to the filesystem?

This feature is opt-in, but we’d suggest using it as a matter of course and we’re changing over all the OpenFaaS Function Store images to run this way.

If you want the best of both worlds, then we have enabled a temporary area for you in the /tmp mount. It is emphemeral and is not guaranteed to be available between requests. It is suitable for writing temporary data.

Throughout the development of OpenFaaS we are always looking for ways to improve security and tighten controls. We’ve done this by switching to non-root users where possible for all OpenFaaS core services and the official templates.

In future posts you will learn about NetworkPolicy and how to enable isolated multi-team and multi-environment installations of OpenFaaS, so make sure to subscribe to the RSS feed with Feedly and follow @openfaas on Twitter.

It’s now over to you to try out a read-only filesystem with your functions and step up your Serverless Security.

If you’d like to get started with OpenFaaS, then you can deploy with helm, kubectl or Docker Swarm:

Add your Star to the GitHub repo over at openfaas/faas because it helps us help you.

Are you using OpenFaaS? Let us know so we can list you on the homepage and docs site https://t.co/UolMK2uMvA pic.twitter.com/EoBVLkZcBv

If you’re a user of OpenFaaS, then let us know about it so that we can list you on the project homepage: