I want to share some news with you. We’ve merged and released support for stateless microservices in OpenFaaS 0.9.0. This means you can now take advantage of the simple, but powerful developer experience of OpenFaaS as a single pane of glass to manage your FaaS functions and microservices. The whole experience is included from the CLI, to the Prometheus metrics to the built-in auto-scaling. Even scaling to zero is supported. I’ll walk you through deploying a Ruby and Sinatra guestbook backed by MySQL deployed to OpenFaaS with Kubernetes.

Why are we doing this now?

There is a lot of overlap between modern, cloud-native microservices and FaaS functions as I’ll go on to explain in the next section. OpenFaaS has always had support for running any container or process whether that be a FaaS Function, the AWS CLI, ImageMagick, or even PowerShell on Windows. Two requests came in from the community within a short period of time which acted as a catalyst for this next step in our story.

One of our newest users at Wireline.io raised a feature request to enhance the HTTP route functionality of functions. Wireline wanted to write functions which could run both on AWS Lambda and on OpenFaaS without any additional changes. Around that same time the CEO of GitLab, Sid Sijbrandi reached out to learn more about Serverless and how it could be leveraged at GitLab. Sid asked me whether OpenFaaS could be used to manage both FaaS Functions and the microservices his team was more familiar with such as a Sinatra apps. He showed a particular interest in scaling to zero when idle.

Let’s look at some background before moving into the tutorial showing how to put this into practice with Sid’s request.

Before getting into what a “stateless microservice” is, let’s go back to my definition of a “FaaS Function” as defined in my blog post: Functions as a Service (FaaS) (Jan 2017).

Since the original post I re-wrote my initial observations as a series of properties.

Functions are stateless because they do not rely on internal memory, state-machines, stored files or mounted volumes. Subject to external services each call to a function should result in the same end-result. Functions don’t have to be strictly idempotent, but they are easier to manage when they are.

Functions are ephemeral because at any point they can be replaced by an identical copy without impacting behaviour. This property means that all functions can be managed in the same way - from their health-check to their lifecycle, logging and monitoring.

Functions auto-scale either from a minimum replica count to a maximum count, or even down to zero and back again to match demand or to conserve resources.

Functions are single purposed, but common sense must prevail. We do not need to create a new FaaS function every time we write function x() {} or def x: in our code. A single purpose may be “CRUD for an employee record”, “format this IBAN” or “identify the contents of this image using a machine learning model”.

If you’ve written at least one serverless function then you’ll be aware that the entrypoint is often abstracted away from you. You just write a handler and you’re done - any dependencies are then expressed in a common format such as a package.json for Node.js or a requirements.txt file for Python.

Here’s an example of a Node.js function:

As a developer you should have no knowledge of the mechanics used to bootstrap the handler - this is the boring, repetitive detail that you can off-load to a FaaS framework or toolkit.

We see a similar pattern of abstraction and off-loading of boring details with microservices frameworks like Sinatra, Django and Express.js. One size rarely fits all needs, so several options exist for each language or runtime.

A stateless microservice is a microservice which can be deployed as if it were a FaaS Function and managed by a FaaS framework or Platform such as OpenFaaS. For this reason no special routes, flags or filters are needed in the OpenFaaS CLI, Gateway API or UI. 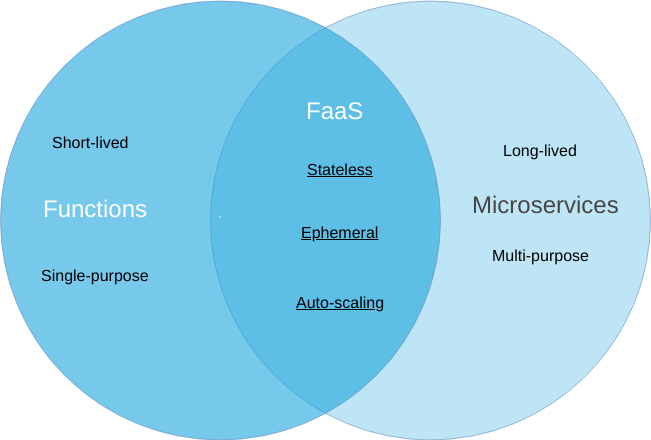 As far as the OpenFaaS components are concerned a function is written in any language and packaged in a Docker image. It must serve content over HTTP on port 8080 and write a lock file to /tmp/.lock. If your function or service detects it is unhealthy then you can remove the lock file and OpenFaaS will restart/reschedule your function.

Sinatra is a DSL or framework for Ruby used to build microservices rapidly.

If we saved this file as main.rb and ran gem install sinatra followed by ruby main.rb a web-server would be started on the default port of 5678 and then we could navigtate to the URL http://127.0.0.1:5678/frank-says.

The OpenFaaS CLI can template, build and deploy this microservice. The OpenFaaS platform will then track metrics for the invocations of the microservice and auto-scale it up, down or even to zero and back again.

First of all create a new folder and generate a dockerfile function. The dockerfile template tells the OpenFaaS CLI to run a Docker build without applying any additional scaffolding or templating, you’ll have to supply your own Dockerfile.

Replace alexellis2 with your Docker Hub account or another Docker registry. A Docker image will be pushed here as part of the build / faas-cli up command.

This will create two files, just like if you’d created a function using one of the languages listed on faas-cli new:

Create a Gemfile and the main.rb file:

Any list of gems can be added in this file.

Now replace the ./frank-says/Dockerfile with:

The Dockerfile does the following:

Now you’re ready to build and deploy the example using the OpenFaaS CLI.

Invoke your microservice with curl or view it in a web-browser:

You can also try a custom route:

You can try updating the messages or adding some other routes then run faas-cli up again to redeploy the microservice.

Now check out faas-cli list to see the invocation count rising each time you access the microservice.

We can now trigger auto-scaling with a simple bash for loop:

When your bash for loop completes or when you cancel it with Ctrl+C you will see the replica count decrease back to 1. 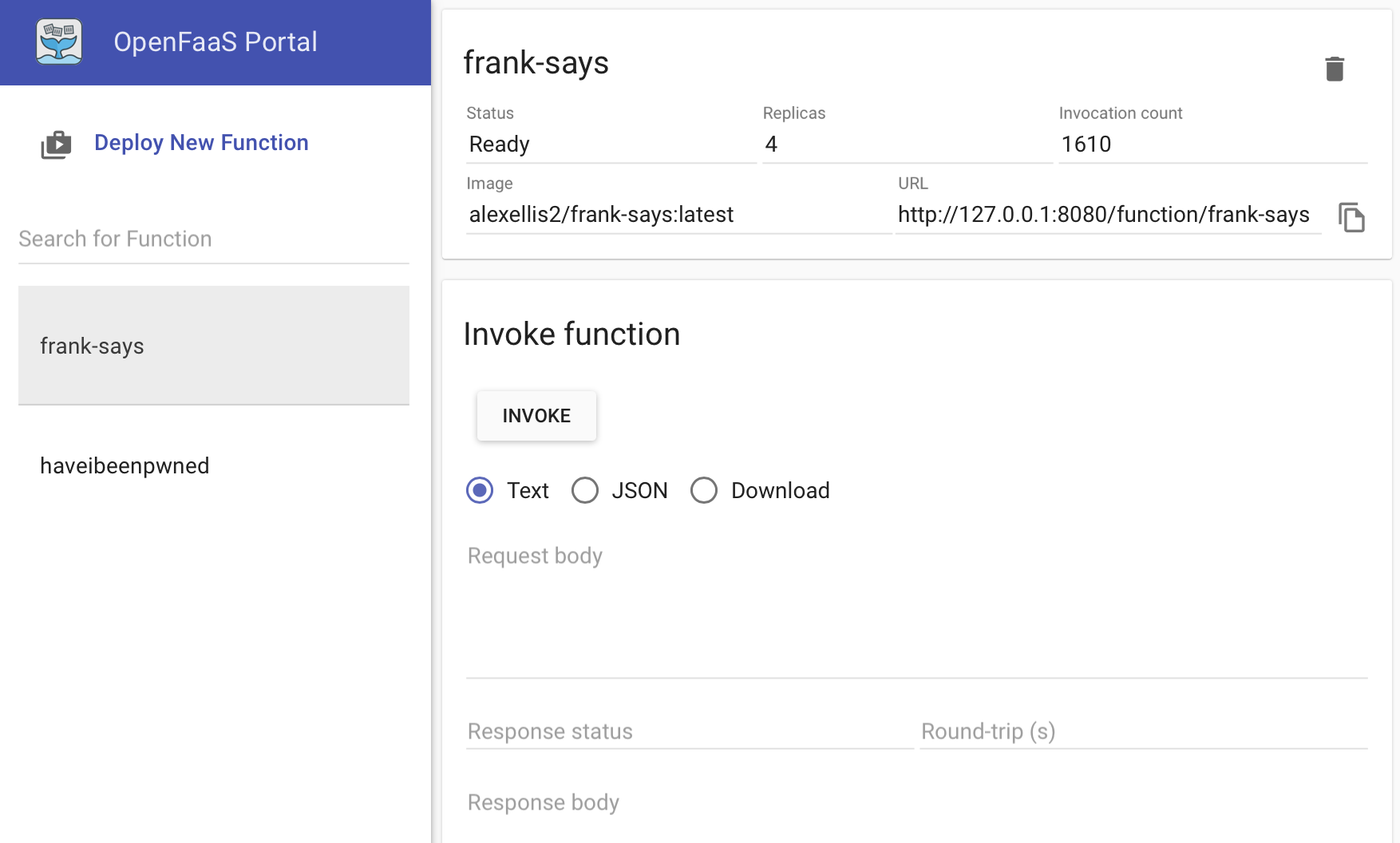 Read more on auto-scaling including how to configure min, max and zero replica scaling parameters.

Deploy the Sinatra guestbook with MySQL

Configure your MySQL database details in ./sql.yml. If you don’t have access to MySQL you can deploy it within a few minutes using helm on Kubernetes or docker run and the official Docker Image.

Use the URL given to you by the command above to access the microservice.

Sign the guest book using the UI and when you’re done you can reset the MySQL table at any time by posting to /function/guestbook/reset. 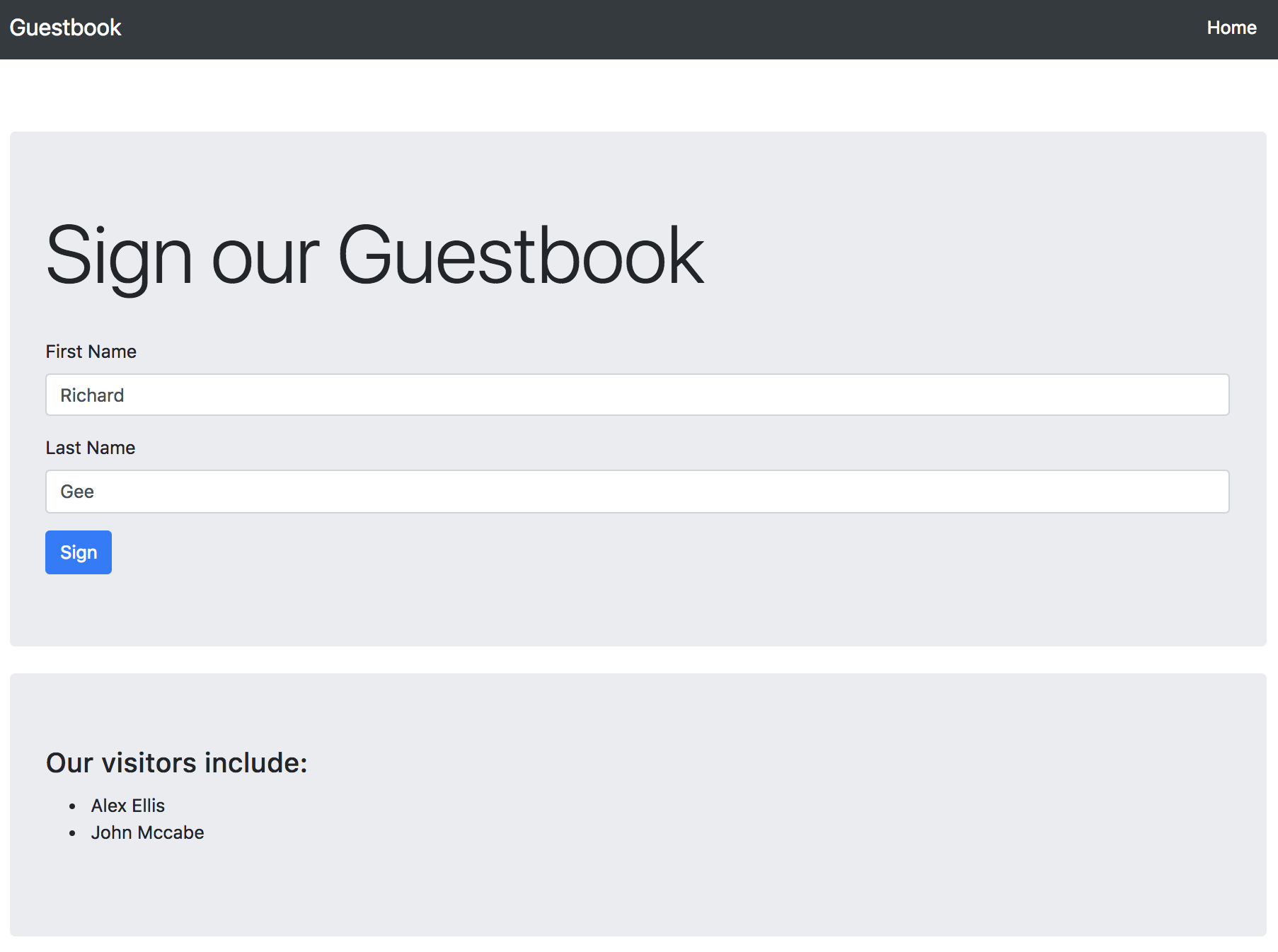 The guestbook code stores its state in a MySQL table which means that it can be restarted at any time without losing data. This is a key property of FaaS functions and stateless microservices. If OpenFaaS adds additional replicas of our code - each one will have the same view of the world because it relies on the external database for its data.

To enable scaling to zero simply follow the documentation to enable the faas-idler.

Then add a label to your stack.yml file to tell OpenFaaS that your function is eligible for zero-scaling:

Finally redeploy the guestbook with faas-cli up. The faas-idler will now scale your function to zero replicas as soon as it is detected as idle. The default idle period is set at 5 minutes, but this can be configured at deployment time.

Going back to Sid’s original ask, we’ve deployed a stateless microservice written in Ruby that will scale to zero when idle and back again in time to serve traffic. It can be managed in exactly the same way as our existing FaaS functions and means you get to focus on building what matters rather than worrying about the internals of Kubernetes or Docker Swarm.

We’ve now deployed both a simple hello-world Sinatra service and a more complete guestbook example using MySQL, ebs views, Bootstrap and Sinatra. It’s over to you to start simplifying your developer workflow with OpenFaaS - whether you want to use FaaS Functions or just make it easier to manage your microservices.